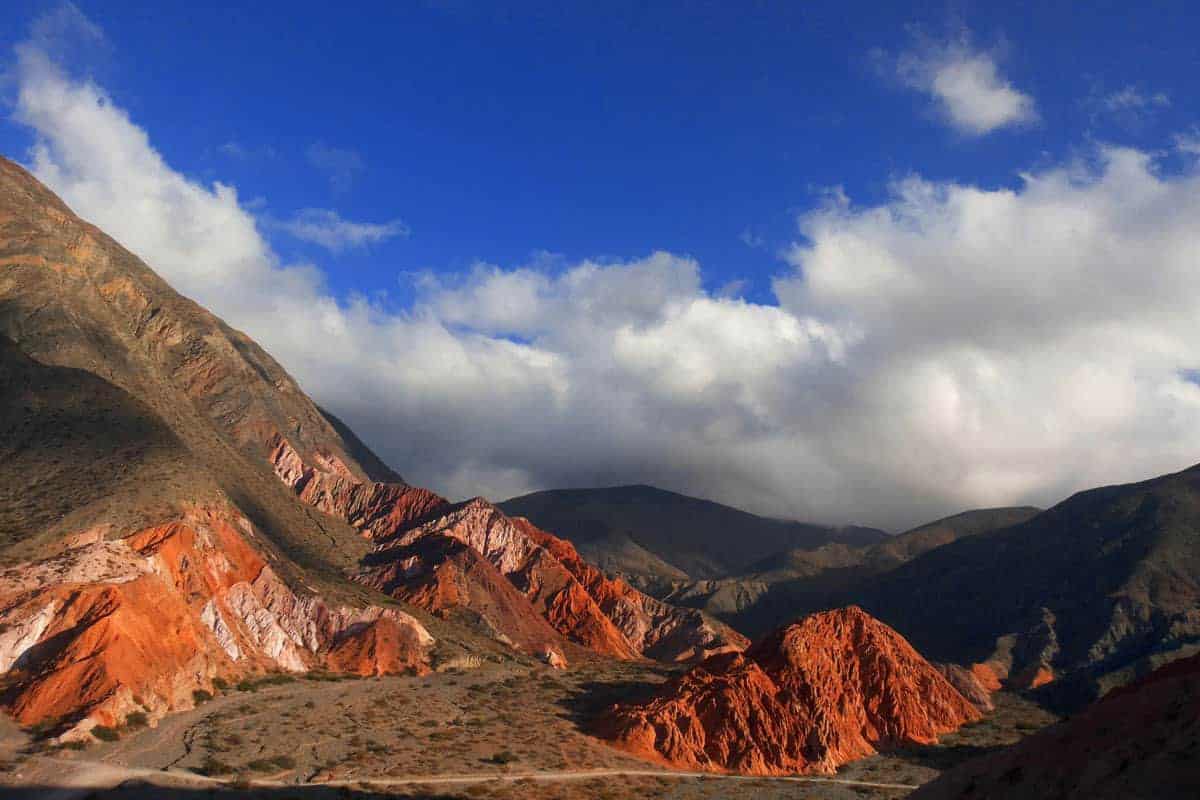 This article page is about a ‘trip in the trip’. The author hired a car in Salta, Argentina and drove through Salta, Jujuy and Tucuman provinces during approx. one week. For more destination guides, check out our Argentina Backpacking guide!

Salta is the main city in the region and the ‘Things to Do’ in this guide are areas around Salta that really deserve a visit! Here is a map outlining the journey:

Read Next (Links open in a new tab).

An Intro to Salta City

Salta is a city in the northwestern part of Argentina known for its typical colonial style and surrounded by some of the wonderful landscapes of South America. It’s known as “Salta, la linda” (Salta, the beautiful) and it’s absolutely a must for all the backpackers who are travelling in South America.

Surged during the last decade of the 16th century to serve as an outpost against ‘indios’ and as a link between Lima and Buenos Aires, Salta became very important during the Argentinian independence in the 19th century.

After independence, the city fell into a period of financial trouble until the last decade of the 19th century when the building of a railway and massive immigration gave the city a better economic outlook.

Nowadays Salta shows itself as a cultural centre, loved by national and international tourism, a very safe place and with all kinds of accommodation and services. Finally, Salta is, after Mendoza, the most important Argentinian province for wine production: a very pleasant end after a day out in the heat of Puna!

Where to Stay in Salta

Salta is safe, full of tourists and backpackers. No worries if you didn’t make a reservation in advance as there are plenty of places where you can just walk in. The majority of hostels are cheap and well served and with good hygienic standards. One that I remember with pleasure is Hostel las Rejas, which is in the very centre and helps with cyclo and bike hire.

Other great options include:

Things to do in Salta

Salta In the city of Salta itself, you can enjoy a lot of activities! You’ll pass a day walking through the beautiful colonial center, visiting the shocking Museum of High Mountain Archeology (MAAM) with its three famous ‘child mummies’.

You can also enjoy spectacular views from the city’s cableway. When the night sets in making the outline of the nearby mountains disappear… what’s better than a good Locro (typical Andean plate) eaten with a sweet wine at Posada Doña Eugenia, one of the best restaurants downtown!

You can end your night with a drink sitting out of one of the many typical bars that stand on lively Calle Balcarce, the centre of the nightlife of Salta.

Heading out of the city into Salta, Jujuy & Tucuman Provinces…

Cierro Siete Colores – 2 hours from Salta About a two-hour journey from Salta you’ll discover a small and unusual village called Purmamarca. Above the town itself stands the incredible seven-color mountain.

Over thousands of years through a complex geological history, the mountain has gained a peculiar range of colours. The pictures (not photoshopped!) will testify better than any word the magnificence of this spot! Just see for yourself…

Tilcara is a small ancient town in the province of Jujuy. Its origins date back to the pre-Columbian period, as well as many other places in the Humahuaca valley, even if the structure that we see today belongs to the colonial days.

Here you can visit the Pucarà of Tilcara (Pre-Columbian settlements) and the relaxed atmosphere of the town make it a perfect place to rest one or two night during your trip in the northern part of the province.

Many backpackers stop here (Staying in the popular Hostel – Casa Los Moldes) on their way to Purmamarca, Iruya, Salinas Grandes or to Bolivia.

An incredible place to travel that will make you feel like you have entered the middle of nowhere! Despite not being so far away from the city and civilization of Salta, the hamlet of Iruya feels very isolated due to its location in between two rivers, that in the rain season threaten to trap anyone who is there.

With a car that is unprepared for two hours of unpaved road interrupted by the three rivers, even in the dry season it’s very difficult to reach the village, and this fact scores another point for the striking isolation of Iruya and its spectacular surroundings.

You may not have even heard of it – but the biggest salt desert in Argentina is not so different from the famous Uyuni Salt Flats of Potosì Province, Bolivia.

Whilst Bolivia’s salt desert is a backpacker rite of passage, Argentina’s version is a remote and little-visited area that certainly deserves a glance!

The empty road that leads to it will really magnify the desolation of the Puna desert, with its tremendous winds and dust-devils. Somewhere over there you may find a car overturned and abandoned years ago, furthermore reinforcing the loneliness of Ruta 40, the longest road in Argentina.

Another little town that is really amazing where you can eat the most delicious ‘empanadasaltena’. Here you’ll find a lot of beautiful arts, crafts and architectire (don’t miss the beautiful roof of the church that is made with cactus wood).

On the way to Cachi, you’ll drive by pepper growing on the cliffs and sideways of the road, sand. That feeling of desolation and other wonderful geological monuments (many unnamed as there are so many!) await you in the spectacular Cachi area.

Finally civilization! Cafayate is a town that offers up a lot of possibilities: you can visit the famous “Ruinas de los Quilmes” just a few minutes from the center or after all that driving, you can just relax in one of the many vineyards where guides will guide you through the decadent secrets of Malbec and Cabernet – two of Argentina’s most famous wines.

There are many hostels and hotels, restaurants and pubs that you can enjoy. We stayed at ‘El balcon‘ – a clean, safe and friendly place with a great balcony.

By bus: Salta, like most of the Argentinian cities it’s perfectly served by bus. From Buenos Aires the journey it’s from 20 to 22 hours, from Mendoza 19 hours, 12 hours from Cordoba and from Bolivia’s border – 7 hours.

By plane: You can reach Salta by plane, spending a bit more of money but saving a LOT of time. You can fly to Salta from Buenos Aires, Cordoba, Mendoza and La Paz.

By train: Unfortunately Salta is not linked by train to anywhere but San Antonio de los Cobres, with the touristy ‘Trenos de las Nubes’ and the city of Guemes. If can go from Buenos Aires to San Miguel de Tucum by train and then take a bus, but it doesn’t seems to be the best option.

All the places mentioned in this article are a bit harder to reach without your own independent transport. Local buses from Salta, Jujuy and Cafayate will bring you to Purmamarca and Tilcara.

From Tilcara there are buses that reach Iruya but they’re quite uncomfortable. If you are traveling with some friends, you should definitely consider the option of hiring a car: it will be relatively cheap and will give you massive amounts of freedom to explore this beautiful region at your own pace.

In Salta, Iruya, Cafayate and in the other big centres, plenty of tour operators can help you hire a car or help you to choose the best option to visit these incredible places.

Where to go Next?

Potosì (BOLIVIA): The city of el cerro rico, that once was one of the world’s richest town thanks to its giants silver mines. Nowadays here lies the spoils of an ancient glory with all their fascinating shadows of past. It’s also the nearest city to the Salar of Uyuni – Bolivia’s salt flats.

Mendoza: Lose yourself in the vineyards of Malbec – cycling and tasting some of the finest South American vines. Check out this article about Wine Tours here.

Cordoba: The first South American University was opened here by the hands of Jesuit Friars: a colonial town where you can smell the power of Spanish conquerors and missionaries during the past centuries.

About the Writer: My name is Greg, I’m an Italian guy passionate for everything that flies. I graduated in 2011 and worked till 2013 in the informatics field, then I join a Panamanian woodworking company for a different job and started traveling through Latin America. In 2014 I started a new career in Argentina: I’m currently trying to be an airplane pilot! Read my blog (only in Italian) here!

One thought on “One Week Driving Through Salta, Jujuy and Tucuman, Argentina”