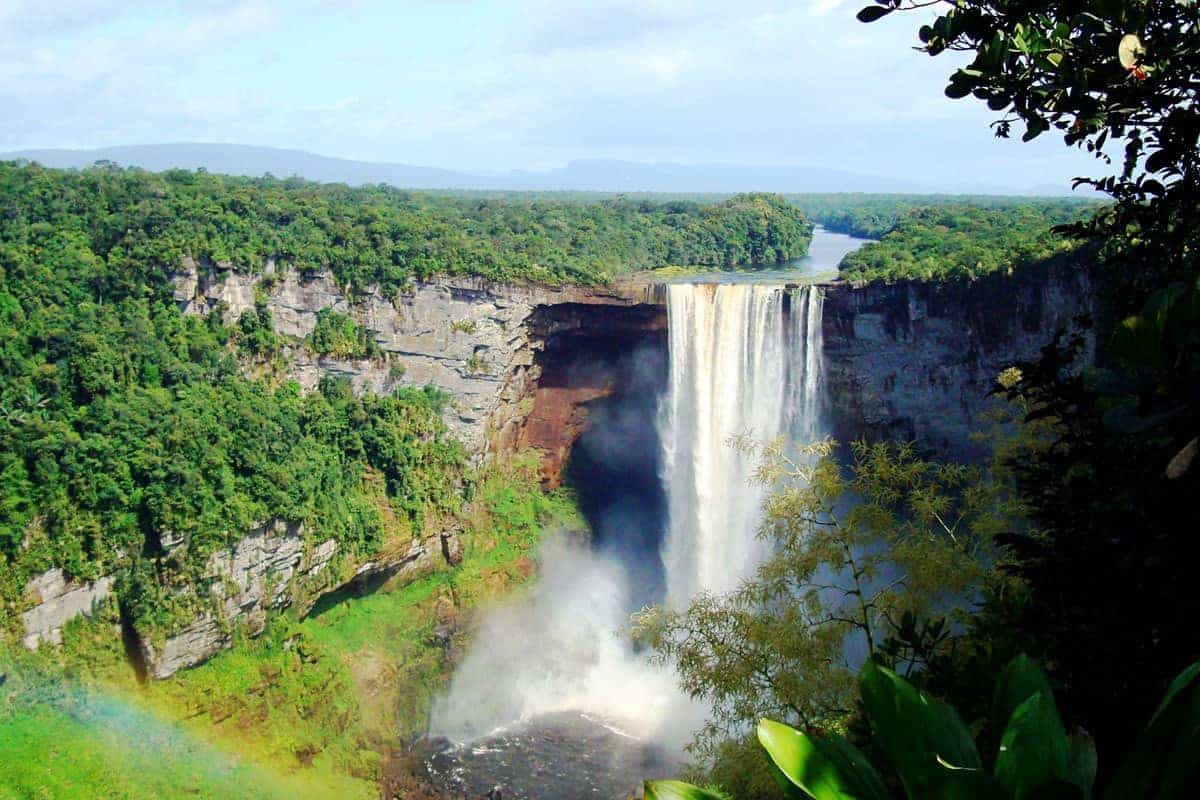 In the northeast of South America lies the third smallest country in South America, little-known Guyana – the only officially English speaking country in Latin America. Sometimes called ‘British Guiana’, the territory makes up one of the three countries known ‘The Guianas’ (Las Guayanas):

1. French Guiana (where French is spoken).

2. British Guiana (where British is spoken) – is the largest of the three countries.

3. Suriname, also known as ‘Dutch Guiana’ (where Dutch is spoken).

Eat: Guyana’s national dish ‘Pepper Pot’, made with a variety of meats and Caribbean spices!

Wear: Loose, thin clothes. The climate is hot all year round here in the Caribbean and it can get boiling during the day. A cool, long sleeved t shirt and loose pants is ideal. Women are best to dress in revealing clothing for safety reasons.

Beware: Don’t walk down back streets of cities at night as you will be instantly discernible as a tourist and may get robbed.

Guyana was once inhabited by indigenous tribal people, such as the Arawak, Carib, Machushi, Patamona, Wapishana, Arecuna, Akawaio, Wai Wai and Warrau. In  1616, the Dutch set up their first colony here at Essequibo and later the British took control in the late 18th century. The country gained independence in 1966 and became a republic in the British Commonwealth of Nations in 1970.

Guyana means ‘Land of Many Waters’ in a local dialect.

The people and culture

As you can imagine by their names, each country’s culture today represents its colonial history – in terms of language, music, sport and food.

In British Guyana, which is the largest of the three countries, you’ll discover that the vibe is more Caribbean than anything else and you’ll instantly recognise a very different culture than in other parts of South America. The people here are laid-back, relaxed and go with the flow. For the most time this laid-back vibe adds to your love of Guyana – however it can be frustrating when travelling on a short time schedule and trying to book a trip for example!

Some travellers have likened Guyana to Trinidad in culture and you’ll also find similarities in terms of food, festivals, music and sport to islands in the West Indies. Especially – cricket! Guyana plays cricket as part of the West Indies Cricket team and co-hosted the Cricket World Cup in 2007. The sport is much-loved and followed by Guianans across the country.

Although the official language is English, most people speak ‘Guyanese Creole’ which is an English-based Creole language that has influences from Dutch, Arawakan (an ancient indigenous South American language) and the Caribbean.

Guyana’s laid-back capital Georgetown is Guyana’s main city and pretty much only city to be honest. There aren’t really even many other towns in the country, so as far as an ‘urban experience’ goes, Georgetown is your only bet. The city has great nightlife, good restaurants and interesting big markets to explore. There is a laid-back feel and the people exude a sense of – ‘Do your own thing, enjoy yourself, no worries’. On the whole, people are very friendly, joyful and curious of tourists and as there is often no language barrier with British or American tourists – you may find yourself making friends with locals during your stay.

Apart from wandering around the city taking in the Victorian colonial architecture, visiting some of the museums in Georgetown can be a great way to spend an afternoon out of the heat of the sun and learn more about the culture and history of Guyana. The Walter Roth and National Guyana Museum are intriguing and have free entry. The National Stadium is worth seeing too where cricket matches often take place. If you can, try and go to one of the matches for a real cultural experience. Football matches, air shows and festivals also take place there frequently and are all worth witnessing.

For nightlife – Georgetown has many bars and clubs that are open until late.Finding them is key. As there is no real main strip of bars, you have to know where you are going in order to find some action – and making local friends can be a great way to experience Guyana’s pumping nightlife! Some large popular clubs include Buddy’s, Palm Court and Gravity, but you may find that socialising at some of the more local bars is more low key and fun for getting to know locals. Popular music usually consists of Hip Hop, Soul and R&B with a Caribbean vibe, often played at ear splitting level in bars and on car stereos as young hip locals drive through the street.

Out of the three ‘Guianas’, Guyana is rumoured to be the most dangerous in terms of safety. However, if you stick to certain rules, such as not wandering round dodgy back streets of the city at night, then you should be fine during your stay.

From an environmental perspective, Guyana is one of the most untouched places in terms of tourism in the entire world. Guyana is home to one of the largest unspoiled rainforests in South America (Iwokrama Forest) – some of which is almost inaccessible to humans.

The wild rainforests, undisturbed by man, are home to a huge diversity of wildlife, including many rare and unstudied species such as the giant river otter, harpy eagle, giant anteater, jaguar, black caiman, arapaima (the world’s largest scaled freshwater fish) and much more. Over time, the forests of Guyana have been celebrated by early explorers such as Sir Walter Raleigh and later by naturalists such as David Attenborough – and were quite recently featured in 2008 on a BBC programme entitled Lost Land of the Jaguar.

If you are interested in nature and wild places; dense forests, beautiful waterfalls, forest trails that make most jungle trips look like a walk in the park – then Guyana is definitely for you. You can book a trip into the rainforest interior, where you will homestay in an Amerindian village and be taken out to spot wildlife. Few places in South America offer untamed adventure like Guyana and in the future, the country could become one of the prime locations for eco-tourism. We can only hope that the nature and wildlife are protected and prioritised above the tourist dollar!

Things to do in Guyana

The Capital Georgetown – An interesting city in its own right, most travellers will pass through Georgetown during their trip to Guyana. With Victorian colonial architecture, bustling nightlife and great markets, it’s a great place to relax before heading to the jungle! For an insight into culture and history, remember that many Museums offer free entry in Georgetown!

Stabroek Market – The busiest place in the city, the hub of trading in Guyana, always bustling with activity life and business deals – jewellery, clothes, food, fruit, technology. Goods exchanged here are sent out to all parts of the country via the transport depot located in the same place.

Kaieteur Falls – Take a chartered flight with Golden Arrows Tours to see the world’s largest single drop waterfall by volume. (Yeah, we had trouble working out what that meant too!) You can take the flight as a day trip as it is only an hour each way from Georgetown and the aeroplane runway is right near the falls itself, where you will land and explore the region. During the flight, you will get to take jaw-dropping photos of dense forest and ariel views of Kaieteur Falls.

Iwokrama Rainforest – Take a trip into the heart of one of the most untouched rainforests on the planet. Best time to visit is October to March during the dry season.

Survival Tour 12 Days in the Jungle – The Bushmasters Tour is an incredible adventure that offers to teach you survival methods in the jungle, sleeping in made hammocks, surviving isolation phase and deep into the Amazon rainforest. Hello Bear Grylls!

Karanambu Lodge – Fancy getting up close and personal with a black caiman? This is the best place to spot them in South America, as well as giant river otters and much more unusual wildlife.

Homestay in Amerindian Village – Places such as Surama village, home to the Macushi tribe, offer backpackers the chance to gain an insight into the Amerindian indigenous culture.

Orinduik Falls – Not as famous as Kaieteur Falls but equally as impressive, these waterfalls are off the beaten track in the heart of lush tropical rainforest. Your own spa jacuzzi amidst beautiful nature!

River Trip – Take a river trip or go fishing on the largest river in Guyana, the Essequibo River, home to rapids, waterfalls and rich with aquatic life.

Explore Guyana’s coast – Deserted, pristine and untouched, these are words to describe the beaches of Guyana. With a coastal belt of 270km bordering the Atlantic Ocean and warm weather all year round, this undiscovered paradise awaits…

Shell Beach – Guyana’s most popular beach is 90 miles long and true to its name is covered in tiny shells. It is famous for being the best place to spot giant leather-back turtles and other species. Every spring four of the world’s eight turtle species crawl onto the beach during the night to lay eggs and return to the ocean. You can arrange trips from Georgetown to see the turtles and stay over in an eco-village.

Banks Brewery Tour in Georgetown: See how this famous brewery makes its drinks and even get to have a taste of some of its product for free!

Tropicana Hotel, Jerries All-Night Long. Good, friendly place to stay with a great location in Georgetown, plenty of tour agents and bars near. Safe area too. Watch out for the locals late, late night partying around the corner though! The cheapest room at Tropicana Hotel will cost you around $15 USD. And the most expensive – $22.50 USD.

There are no trains or trams in Guyana. However, they are plenty of minibuses (all with numbers stuck on the sides) – which is the only real public transport available. The roads are not laid with tarmac, are full of potholes and cars drive on what can be described as sandy mud. The journey from Lethem to Georgetown via minibus is definitely gruelling – travelling through the jungle, at unsafe speeds, and squashed in the minibus like a sardine – it’s a real backpacker journey!

In the cities and towns, taxi’s are available everywhere, registered or not. If the registration plate begins with a HC, then they are official. Others are not and will try to bargain a price with you. The taxi drivers drive fast and know the area well so its fairly quick and easy to get around, although not always the safest.

Cost of Travel in Guyana

It’s a mixed bag really, whereas food, accommodation and drinks are not too expensive, tours and trips can really crank up your budget. Especially compared to other places in South America. Here are some examples to give you an idea. (1000 Guyanese Dollars is approximately 5 US dollars)