Did you know that there are thousands of islands in South America? From epic volcanic landmasses to tiny islets, there is a surprising amount to see once you venture off of the mainland.

If you’re looking to add an extra dose of adventure to your next trip, these South American islands will not disappoint! Whether you’re looking for a balmy beach stay or an enigmatic escape, you’re in the right place.

With so many gorgeous islands in Brazil, it can be hard to know where to start when narrowing down the search. However, when it comes to selecting the best of the best, Ilha do Marajò is definitely up there. This island, around the size of Switzerland, is located in the mighty Amazon River. Offers a bit more perspective to just how absolutely massive that river is, right?!

Home to stunning river beaches, mangrove forests and a wealth of exotic animals, Ilha do Marajò is the ultimate jungle island escape. Although it is beginning to see an increase in tourists, this part of the Amazon is still relatively untouched by tourism considering how accessible it is.

The fascinating Uros Islands float in Lake Titicaca, around five kilometres from the Peruvian city of Puno. These man-made islands have been constructed from dried totora reeds. It is estimated that there are some 120 islands that make up Uros, and they are home to people from the Uru community.

The Uru people migrated to the area around Lake Titicaca nearly 4,000 years ago. Due to the threat which came from the arrival of the Incas, many people headed to the lake in search of a safer life. Living on floating islands would make it easier for them to escape their enemies if pursued.

The Uros Islands are still inhabited to this day and are a popular place to visit in Peru. They attract hundreds of tourists, all wanting an insight into what life is like on a floating island. Although the Uru people live in an unusual setup, they have not shunned modern life. Many of the community have televisions that are powered by solar panels!

Read more about exploring the floating islands on Lake Titicaca in this post.

When most of us think of idyllic island escapes, white sandy beaches fringed with palm trees tend to spring to mind. Although South America doesn’t have an abundance of dreamy beach escapes when compared to other continents, there is certainly some cracking coastline on offer.

The island is home to some beautiful hidden wonders, including the breathtaking Noronky Beach. If you love relaxing in the sun or paddling in crystal clear waters, this is the place for you. Wildlife enthusiasts will also love this island – the sea is great for snorkelling and diving. Keep your eyes peeled for sea turtles!

Arguably one of the most famous national parks in South America and the world as a whole, the Galapagos Islands are a collection of 127 islands, islets and rocks. The archipelago is home to some of the most rare and enchanting wildlife in the world as was made famous by Charles Darwin as he formulated his Theory of Evolution.

A trip to the Galapagos comes with a hefty price tag but those who can stretch their budget to make the trip will be rewarded. Volcanic landscapes, dreamy beaches and a plethora of adventure await you on these Ecuadorian Islands.

Home to hammerhead sharks, blue-footed boobys and giant tortoises, you won’t have to go far to spot exotic wildlife up close. No matter whether you opt for a multi-day cruise or land-hop the islands, unforgettable experiences are aplenty here.

This isolated volcanic island (also known by its alternative name of Easter Island) is home to one of the world’s biggest enigmas… The Moai head sculptures. They are probably one of South America’s most famous attractions and regularly feature on the front of guidebooks.

Captivating as they are, mystery swirls around these statues.  Although we know how they were made, no one really knows why they were created in the first place. The most common theory is that they were made for ceremonial or spiritual reasons, however, there is still a lot to learn about these ancient monoliths. In recent years, researchers announced that they have unravelled the secrets behind the placement of the Moai sculptures. This hasn’t dampened the interest in Rapa Nui though!

This location remains firmly on many a traveller’s bucket list, both for its incredible history and extreme remoteness. The downside is that a visit to Easter Island doesn’t come cheap. Make sure to shop around for flights and be prepared to drop some dollar for this first-class island experience.

This rocky outcrop on Lake Titicaca is the largest of all the islands there. It belongs to Bolivia and is known for providing travellers with a rugged and rustic experience. There are no cars or paved roads on the island and the locals mainly work in agriculture.

This island, along with neighbouring island, Isla de la Luna, are famous for being the believed birthplaces of the sun and the moon, according to the Incas. There are a number of fascinating ruins on Isla del Sol, however, tourists are not able to access those in the north of the island.

For many years, this has been an island of social unrest. Disputes over how to use tourist revenue have led to the north of the island completely cutting itself off from visitors. There is a blockade to stop tourists from accessing the north and it is manned by locals. If you know anything of Bolivian blockades, you’ll already know that the people don’t do things by halves. Avoid trouble and stay in the south!

Home to ‘the city at the end of the world’, Tierra del Fuego is an archipelago off the southernmost tip of South America. Famed for its epic mountains, breathtaking national park and fascinating history, it sees thousands of intrepid adventurers every year.

Part of the Patagonian region, the islands are known for an array of incredible wildlife, from penguins to guanacos. It is the jumping-off point for Antarctica cruises too, the final frontier for adventurous backpackers (who can afford to make the trip).

Located in the Caribbean Sea, San Andrés Island is weirdly closer geographically to Jamaica than Colombia. However, politically it is recognised as being part of the latter. Postcard-perfect, this island is the perfect place to get your fill of vitamin sea.

Designated as a UNESCO Biosphere Reserve, the island and surrounding waters are a haven for marine life. Don’t miss the opportunity to snorkel or scuba dive in these crystal clear waters. Alternatively, if that sounds like a bit too much hard work, there are countless idyllic beaches to while away the hours on.

The downside of San Andrés is that it is considerably more expensive than mainland Colombia, which is why so many shoestring travellers decide to skip it. The only way to access the island is to fly but the journey is definitely worth it!

Close to the coastal town of Paracas are the Ballestas Islands. These rocky islets are a must-visit location for nature lovers and have even recently featured in a David Attenborough documentary!

You’ll zoom off to the islands by boat, passing the mysterious Paracas Candelabra on your way. Once you reach the islands, you’ll see thousands of birds, ranging from pelicans to boobys and even Humboldt penguins.

As well as birdlife, sea lions also frequent this area and if you get really lucky, there is even the chance to spot dolphins en route!

Trips to the islands from Paracas run daily (weather dependent) and cost very little. It is worth mentioning that these tours take place solely onboard the boat, you will not land on the Ballestas Islands.  Don’t miss the chance to explore the rest of Paracas National Reserve if you get the chance, it really is a fascinating place.

Chile’s second-largest island is situated west of the mainland and is uniquely wonderful. Known for its colourful houses on stilts, you’d be forgiven for assuming this architecture was more German-influenced than Spanish. Despite being a part of Chile, this island has retained its own distinctive identity, making it vastly different from anywhere else in the country.

For hundreds of years, Chiloe was isolated from the mainland. This meant that island life evolved very slowly and people’s lifestyles remained largely unchanged.  As a result, spiritual traditions still thrive here and the island has become famous for its spooky tales of brujos (male witches) and cults.

The Falkland Islands, also known as Islas Malvinas to the Argentines, is a regular stop on many Antarctic cruises departing from Ushuaia.  Spanning an area of around 7,500 square kilometres, these islands offer a wonderfully rustic travel experience that harks back to another time. (There is only one traffic light on the entire island!)

For wildlife lovers, the Falklands is an absolute dream destination, with over 200 species of bird and 15 species of whales and dolphins. Two bird species are endemic to the Falklands, meaning you won’t find them anywhere else.

Home to under 4,000 inhabitants, these islands are unlikely to be like any other you will have visited. The downside to visiting the Falklands is the expense that comes with booking a trip there. This archipelago is not a budget-friendly destination and tour and transport costs can quickly build up.

It is no secret that Brazil is the beach capital of South America. The country is blessed with nearly 8,000km of coastline and that is without including the wonderful islands that sit off of the mainland.

If you’re after paradise, Ilha Grande, floating off the coast of Rio de Janeiro is the ideal tropical escape. This relaxing retreat offers the perfect opportunity to detox from modern life, with just one ATM having been recently installed on the island and the entire place being a no-car zone.

If you are looking to break from the hustle and bustle that the mainland can bring, a few days of Ilha Grande is sure to recharge your batteries. When you get tired of sunning yourself on the sand, there is an abandoned prison to explore as well as plenty of jungle hikes to complete.

Easily accessible from Cartagena, the Rosario Islands are a collection of 20 coral islands and islets. They are often visited as part of a day trip from the city but a far better option is to stay overnight if you have the time.

Although not as cheap as the mainland, there are budget accommodation options on the islands, including the epic Secreto Hostel. When it comes to food on the islands, the seafood needs to be tasted to be believed!

If you visit, don’t miss the chance to swim with the phosphorescent plankton at Laguna Encantada. If you’ve watched the backpacker classic ‘The Beach’, you’ll already have seen what these magical little organisms can do, but for those of you that haven’t, when disturbed, the plankton shimmer and glow. This promises a magical, underwater travel experience that you’ll remember for years to come. And that is what travel is all about, right?

Have you visited any of these South American islands before? Which one is your favourite? 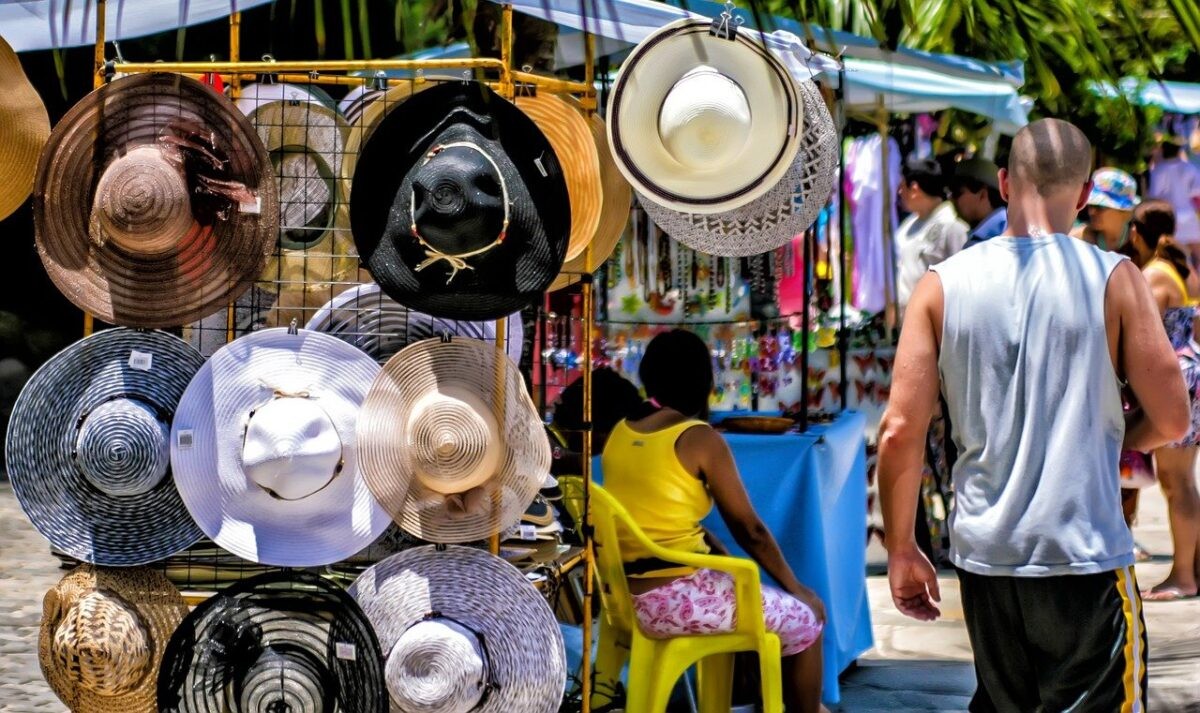 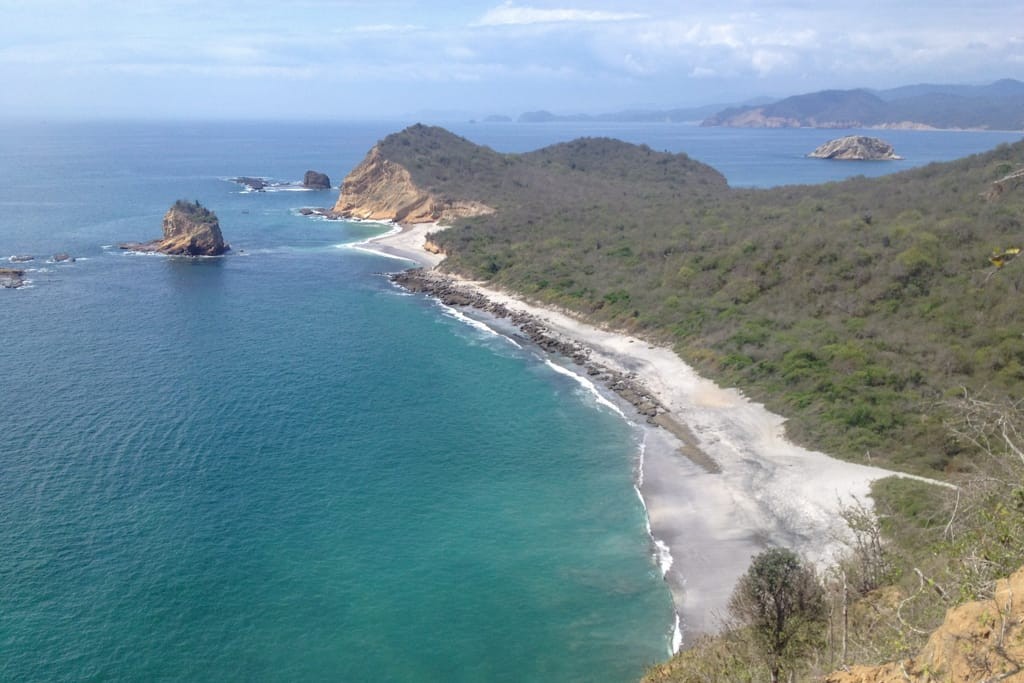 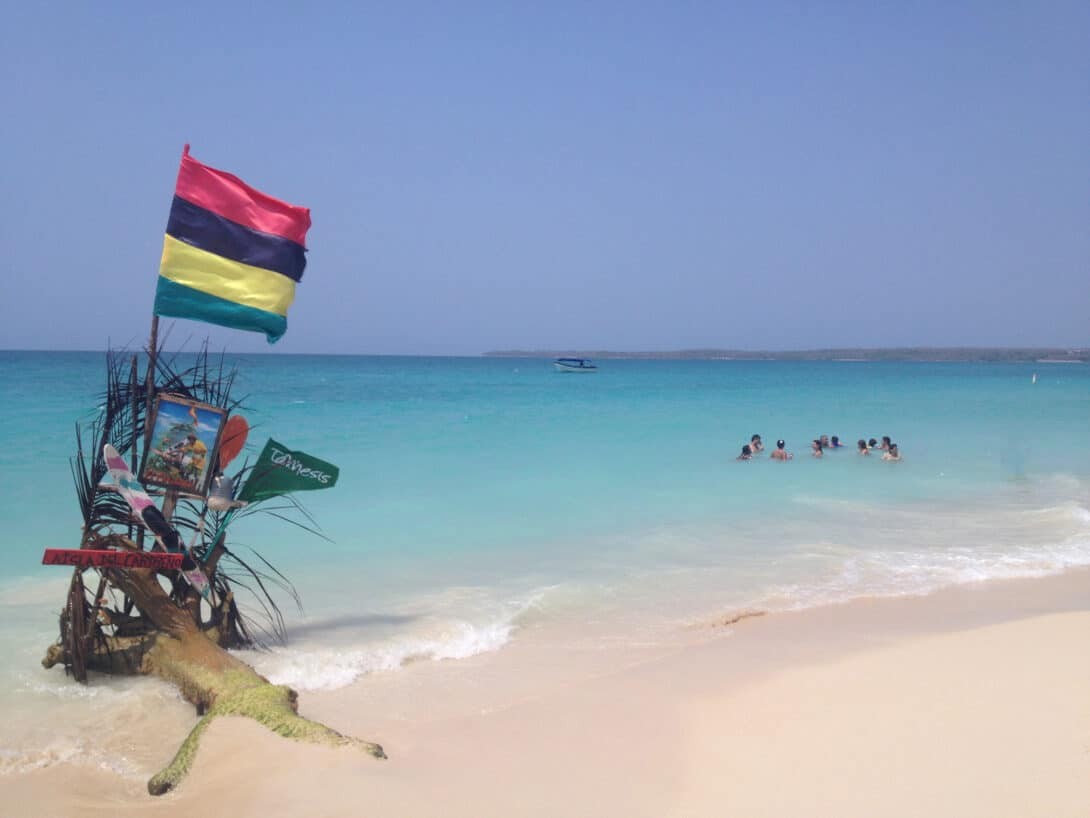