The White City of Arequipa is famous for its grandiose architecture and imposing Andes Mountain backdrop. Activities in and around the city, centre on outdoor pursuits such as hiking and rafting which begs the question of whether there is anything for backpackers looking for a more relaxed stay…

Chaqchao Chocolate Factory is located close to the famous Santa Catalina Monastery and is Arequipa’s only organic bean-to-bar chocolate shop. Before you all go running off to cram your backpacks, allow me a minute to explain. Chaqchao is not just a factory, nor is it just a shop.

At Chaqchao it actually possible to have a class in chocolate. Yes, you read that right, a lesson in chocolate! Of course, this is a thing that dreams are made of, so I was keen to check it out!

After arriving at Chaqchao, we pulled up a pallet seat in the sun terrace and waited for 11 am to roll around. Bang on time, resident chocolate expert Adrian flung open to doors to his classroom and greeted us enthusiastically. He would be giving the Bean to Bar workshop.

Once the other chocolate fanatics joined (there were eight of us in total which is the maximum group size), Adrian laid out our schedule for the day.

It quickly became apparent that Chaqchao put real care into selecting their staff. You would have to go a very long way to find a more animated and passionate host than Adrian. As he spoke about the origins of chocolate in Peru and the ingredients required to make it, his eyes lit up.

The first part of our education was an introduction to the four ingredients required to make real organic chocolate. There is cacao butter, cocoa powder, sugar and powdered milk.

In order to be officially considered a chocolate, there needs to be a certain percentage of all of these ingredients. I won’t go into the details here – you’ll have to take the class, but any chocolate which falls below these standards is actually defined as a chocolate flavoured candy.

It is highly difficult to enforce what is and isn’t real chocolate in the food standards world as all chocolatiers have the right to keep their recipe secret.

Both cacao butter and cocoa powder come from the Cacao fruit. Adrian, ever the eccentric teacher, scattered cocoa beans across the counter for us to sort. Any beans with their shells intact would be good for roasting so we rifled through them with unparalleled enthusiasm as a highly excitable Adrian swept around the classroom to assist.

After the beans were placed into the oven, we were each given a large lump of cacao butter to smell and touch. It was clear that this class was going to stimulate our senses and get our mouths watering!

Adrian explained that it is actually the cacao butter that provides the chocolate smell and not the cocoa powder like is commonly thought. He explained to us how cheap commercial companies around the world skimp on cacao butter and cocoa powder and instead compensate with cheaper artificial flavourings and colourants.

It was fascinating to learn how little is actually needed to make organic chocolate and the health benefits which come with its consumption. During this explanation, we were all given a glass of cacao tea to enjoy. Who knew this fruit was so adaptable?!

After our beans had finished roasting, we were given the job of de-shelling them. This was a surprisingly fiddly process and I was excited when Adrian announced we could sample the fruits of our labour. I was quickly disappointed though – the beans were horribly bitter and I was shocked that such a horrible taste goes into creating a food as heavenly as chocolate!

The beans finally de-shelled, we took to grinding them down using a pestle and mortar. We were aiming to get the paste as smooth as possible although this was hard work! After a few minutes of vigorously pounding away at the beans, I passed on the paste to the next person.

I had no idea making chocolate was such hard work but at least now I would be able to enjoy the fruits of my labour guilt free! Paste all ready, we headed downstairs to get creating.

Once we had arrived at our work station, Adrian showed us the machine that grinds the cocoa beans into powder. In the class, we had used a pestle and mortar but Chaqchao produce far too much chocolate to be able to do this! The machine grinds the beans down as much as possible which is a process that takes several days!

Once made, the chocolate needs to be melted down in the microwave and must measure at a specific temperature to enable fluid pouring and to temper the chocolate. After we had all received our chocolate moulds, Adrian whipped out a number of different toppings. We had everything from nuts to coca leaf powder!

After creating our own chocolate, we got the enjoyment of spooning any excess from the bowl and into our mouths. It was unbelievable how just few stages had impacted the flavour so much. Finally, it felt like we were eating chocolate! With our pride and joy now solidifying, we headed upstairs for the thing I was most excited about: the blind taste test.

How Well Do You Know Your Chocolate?

Using everything we had learned from the last couple of hours, we tried to work out the percentage of cocoa powder, milk, sugar and cocoa butter in each sample. Initially, we smelt them to see whether we could pick out the presence of cacao butter.

The more strong the smell, the more likely it was to be real chocolate and the higher the percentage. After smelling, we moved onto tasting!

A strong smell of vanilla indicates a very low cacao butter content which means the chocolate is far more likely to have a lower percentage of the four necessary ingredients. In fact, the most likely outcome is that it is not chocolate at all, just a chocolate flavoured candy bar.

After the grand reveal, I was surprised to find out that it seemed I favoured the cheap, fake chocolate over the authentic, more rich versions. It looks like perhaps it isn’t the cocoa that I’m crazy about but actually the sugar!

This was a bit of a sad realisation for me. Sensing my disappointment, Adrian revealed there was one more thing for us to taste. He pulled out a handful of white chocolate pieces which have always been my favourite.

White chocolate tends to be the most sugary of all of the different chocolate types. As companies tend to skimp on cacao butter owing to cost and because there is no cocoa powder present, the missing ingredients are substituted with increased sugar and flavourings.

It occurred to me as I smelt the chocolate that there was a really strong smell – just like dark chocolate. It didn’t smell like vanilla as I was used to but of cacao butter, a smell I had always previously associated with dark chocolate.

As I popped it into my mouth, it was like the world had stopped turning. The creamy, rich taste of the chocolate blew my mind! It was so different to the stuff I had eaten before. Smiling at my reaction, Adrian said, ‘you probably never realised it till today but this may well be the first time you’ve ever eaten real white chocolate.’ What a revelation!

After I had recovered from my lightbulb moment, Adrian ran downstairs to get our chocolates. I was very proud of mine, they looked like they had been taken straight out of a fancy box. Maybe I should consider a change of career and become a chocolatier!

After Adrian had managed to drag us away from admiring our creations, he demonstrated the difference between tempered and untempered chocolate. And illustrate his point he did!

If cacao is a fruit, chocolate is one of your five a day right? This is the philosophy I will be living by in the future! Chaqchao’s chocolate class was an absolute education in one of my favourite foods which made me realise how little I knew about it in the first place!

I never realised that cacao has such great health benefits and it is the sugar loaded into bars by commercial companies that gives chocolate a bad name.

Aside from being incredibly interesting, the class was also surprisingly fun. Adrian was brilliant, causing the whole class to laugh out loud and really enjoy the experience together. Relying so heavily on the senses meant that everyone got really involved and it was far more than your average classroom experience.

Adrian answered all questions with gusto and clearly has a genuine and intense love for what he does. A little eccentric he may be but this only heightens his comparability to the most famous chocolatier of them all, Willy Wonka!

Whilst Arequipa is a city with plenty to keep an adventurous backpacker busy, this is a wild card activity that will definitely deliver more than you expect.

Not only are you able to grow your knowledge regarding one of nature’s finest sustenances but you get to make and taste different types of chocolate. If you think that sounds like a day in heaven, let me assure you it is! 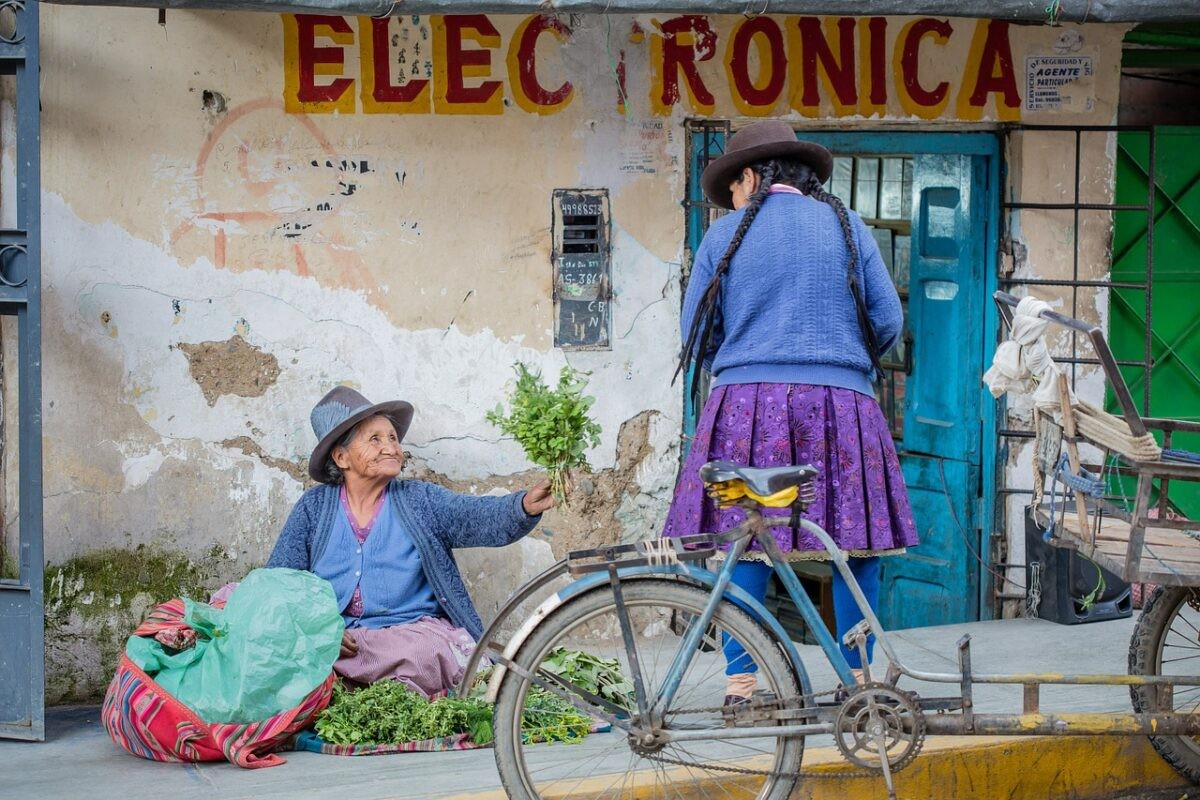 2 thoughts on “Am I in Heaven? Bean to Bar Chocolate Workshop – Arequipa, Peru”