For the last month I’ve been spending my days walking through the jungle with my furry new friend Balu.  Balu is a beautiful Andean Spectacled Bear who for the past eight years has lived in a small brick house in Parque Machia, a wildlife refuge located in Villa Tunari, Bolivia.

Like many of the animals rescued by the wildlife charity Comunidad Inti Wara Yassi, Balu’s story is a sad one.  When Balu was just a wee cub, poachers killed his mother and sister, sparing him only so he could be sold to the circus. Luckily, CIWY learned of the situation and, by threatening to involve the authorities, were able to rescue Balu and bring him to his new home. 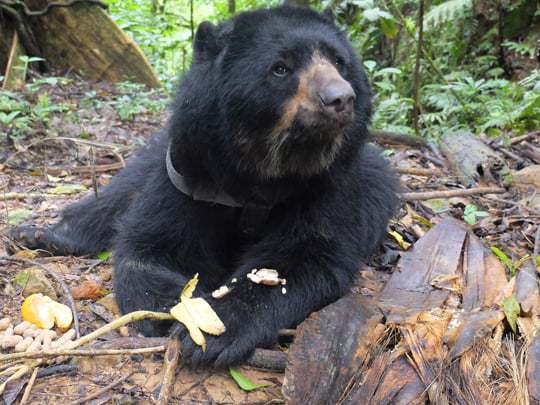 Working with Balu has been an incredible experience, with my days spent strolling through the jungle, curling up with a passing monkey and good book, and, on occasion, running for my life (it’s incredible how fast you can move when a 300 pound bear is barreling toward you). It’s really a tough experience to describe, so instead I’ll just bring you along on a typical day with Balu…

A Typical Day with Balu – My Furry Friend

After meeting up with Ali and Turner (the two other Balu volunteers) at the cafe to grab breakfast and gather Balu’s food for the day, we head off through the park to Balu’s house.  On the way through monkeyland, we’re warned to be cautious: Edwin, one the more vicious male capuchins, escaped his cage overnight and is now on the prowl.  “Just don’t look him in the eyes”, we’re told.

Things get off to a smooth start with Balu. We safely hook his rope to his harness and calmly make our way to Balu’s first bench for breakfast.  The weather’s decent: not so nice that we’ll encounter many tourists hiking on the trails, not so hot that Balu will be too lazy to want to walk, and not likely to rain enough to throw Balu into a dangerous fit of rage.  This is excellent news for me since I’m holding the rope today and so, in the event of a crisis, am the most likely to get dragged into a very one-sided wresting match. 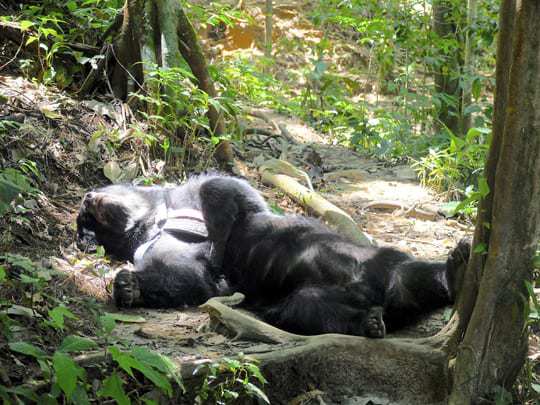 During our daily game of hide-and-seek, where we stash bananas in neighboring trees for Balu to find, things take an interesting turn when I look back and notice a wild capuchin digging through Turner’s backpack.  By the time we chase it off, it’s gotten hold of the emergency cell phone, which it promptly carries up a nearby tree.

While Balu happily continues to munch on bananas, we each take turns shouting madly and barraging the cheeky chap with rocks and sticks in an effort to prevent him escaping into the surrounding jungle.  Finally, I pass the rope over to Ali and, after a handful of attempts, manage to nail a branch just shy of the monkey’s feet, convincing it to drop the goods and flee.  Unfortunately, however, the monkey’s aim is better than ours and the phone lands directly on the only hard surface in the area: Balu’s bench.  Although we manage to collect the majority of the pieces, they just don’t seem to fit together anymore. 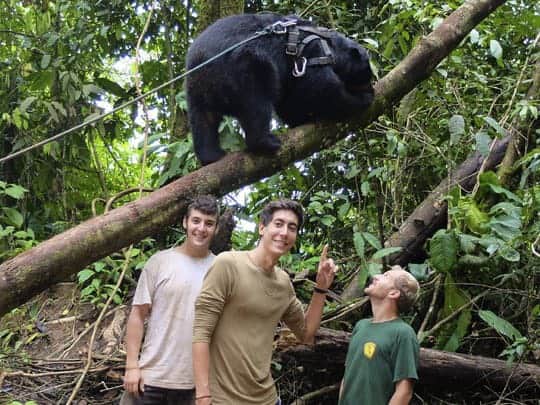 A little while later, as we coax Balu along on his third or fourth lap of his upper trail while passing time until his lunch, Balu makes a surprise dash forward toward Ali and Turner.  In a desperate attempt to escape, Ali sprints off trail and frantically bushwhacks his way down the neighbouring slope. Such evasive maneuvers normally work, though this time Balu doesn’t miss a beat and follows down hot on his heels.  Because it’s all happening so fast, I miss my narrow chance to wrap Balu’s rope around a tree or root and so, despite my best efforts to dig my heels into the muddy trail, I’m dragged along for the ride.

Just before the chase ends, Ali’s backpack slips off and Balu focuses on tearing his way into his prize, which includes mine and Ali’s lunch as well as the emergency bag of coca leaves (to be used as a lure in case of a serious emergency).  Unfortunately, wrenching a treat-filled backpack away from an excited, coca-addicted bear is NOT like taking candy from a baby.  Finally, with the help of Turner’s sandwich (a noble sacrifice) and a sneaky around the back grab-and-run, Ali manages to retrieve the pack while I secure the rope around a nearby tree.

After the four of us manage to catch our breath, Balu finds himself a comfy spot to lie back and have a nap.  As the three of us make ourselves at home on the jungle floor and begin to settle into our books, a friendly group of spider monkeys swings their way into our corner of the jungle.  We’ve gotten to know a few from this group during their almost-daily visits and always look forward to cuddling with a couple of the mothers while the youngsters play in the trees above. 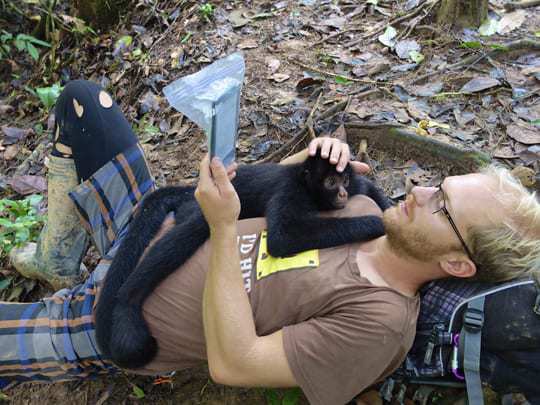 After a relaxing couple of hours, Balu awakes and we all calmly make our way back down to his small brick house.  Just another day on the job…

Now, as the month wraps up, I realize how fond I’ve become of Balu and all his eccentricities. Sure, he’s not the kind of creature I’ll ever be able to snuggle up with or even pet (except for a quick pat while his attention is on his food), but I still feel like he and I share a real connection. He seems marginally contented when he greets me at his cage door in the morning, and even sometimes looks me in the eye while I bottle-feed him his special api, honey, and banana breakfast smoothie. I’m sure Balu knows when it’s me handling his rope and, besides a couple devious and extremely close attempts on my first day, he’s been relatively good about not trying to kill me. I want to think that in my short time volunteering with Comunidad Inti Wara Yassi I’ve helped to make a difference, even if not in the grand scheme of things, at least by providing Balu with some fun field trips through the jungle.

To all the volunteers, staff, and generous donors helping to provide the animals at CIWY with a safe and happy environment: thanks, it’s been unforgettable; and to Balu, my almost-huggable and somewhat volatile friend: never stop chasing your dreams (or your volunteers).

For more than 20 years, Comunidad Inti Wara Yassi (CIWY) has been working to provide a safe and healthy environment for rescued animals while educating the Bolivian public to respect wildlife and the environment.  A not-for-profit organization, CIWY is funded entirely by donations and volunteer fees.  Despite receiving no financial support from the Bolivian government, CIWY has managed to grow to three locations, now home for upwards of five hundred animals of over thirty different species including monkeys, birds, jungle cats, and an Andean bear, many of whom were rescued from the illegal animal trade. 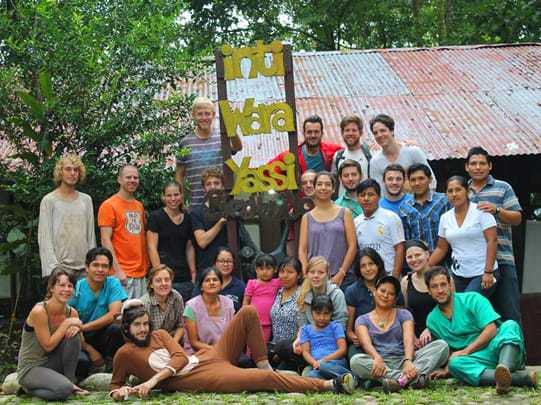 CIWY first began in La Paz as a school of alternative education, aiming to help some of the city’s many disadvantaged youth.  After a series of field trips exposed the children to Bolivia’s lush rainforest and its rapid destruction, the children vowed to help protect the fragile ecosystem and its creatures through a campaign of education and awareness. During a later field trip to Rurrenabaque, the project took an important shift when the students pooled together their meagre funds to purchase and rescue a spider monkey from its owners who were forcing it to drink alcohol and dance for their amusement.  Over the next few years, a number of other abused or mistreated animals were adopted and rescued, despite the constant struggle to house and feed them.  Finally, Parque Machía, the first wildlife refuge in Bolivia, was established. 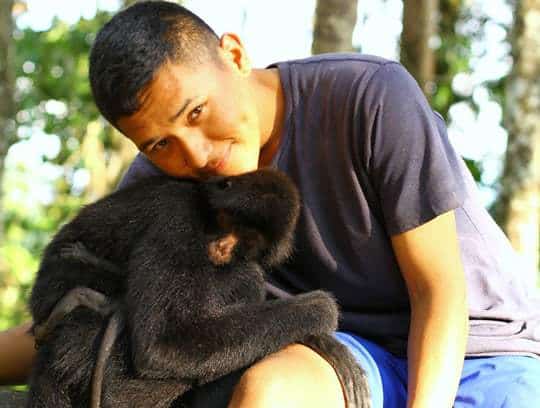 For more information on the Inti Wara Yassi Community, including details on how you can help out by volunteering or making a donation, visit their website at www.intiwarayassi.org and check them out on Facebook here.

Andrew is a Mechanical Engineer by trade and travel writer/photographer by passion, and is currently on an open-ended break from his career to travel the world in search of meaningful experiences, alternative and practical knowledge and life-changing inspiration.  He’s spent the past year traveling through Central and South America with his wife Chelsea, who represents the better half of their blogging team at Two Bein’ Chili.  With the ultimate goal of identifying a sustainable means of living that can keep them both as far away as possible from the nine-to-five grind, if everything goes as planned they’ll find themselves owning and operating an awesome organic farm/backpacker hostel in the mountains of British Colombia, Canada. You can follow Andrew and Chelsea through their blog – www.twobeinchili.com, on Facebook & on Twitter.