The first rays of sunlight broke the horizon. Around us, the glacier burned in the orange, morning light. Sweat froze in beads on our faces and wind whipped us from every direction. The guide, my friend, and I stood speechless, perhaps in awe or simply from the lack of oxygen. After hours of ascending the glacier, we stood at 6,088m (19,974 ft.), the summit of Bolivia’s majestic Huayna Potosí. 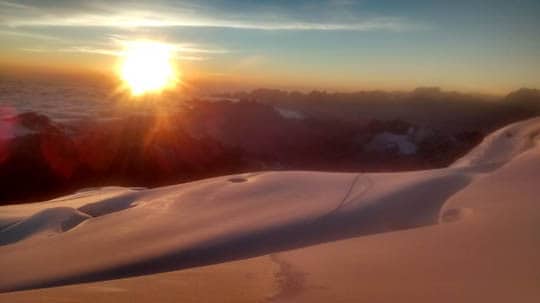 Views from the summit of Huayna Potosí, Bolivia

Huayna Potosi towers over the chaotic city of La Paz. Adventure tourism along with the city’s historical patrimony draws travelers from all over. The low cost of travel in Bolivia, comparatively to the rest of South America, has caught the eye of many a backpacker.

While volunteering in Cusco, I met a fellow traveler who shared my interest in climbing. A plan to summit Huayna Potosi slowly gathered momentum in our minds. After a week of quick planning, we hopped on the overnight bus to La Paz; a fourteen hour bus ride with a lovely, early morning heckling by the Bolivian immigration authorities.

A little shaken, we were dropped off in El Alto, the city above La Paz. Election time was around the corner and protests obstructed the streets; the bus could not go further. Low and behold, we arrived at the Hostal La Republica ready to rest and recover. The next day, we would head up to the base camp.

My friend and I, in less than thirty-six hours would travel from Cusco (3,400m) to the Huayna Potosi base camp (4,800m). The 1,400 meter jump could certainly be considered a muy mala idea. My friend and I were joined by three other travelers from Germany, the group seemed quite cohesive. From the base camp, we hiked to the glacier for some basic safety training. My friend had experience on glaciers and had taken courses with the Swiss Alpine Club. At eighteen, this was my first glacial ascent. The sudden altitude jump did not make it any easier. 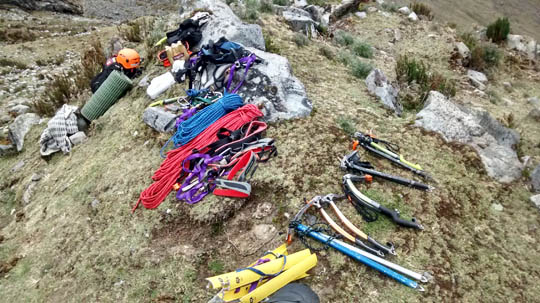 Mountaineering equipment is needed for this serious climb!

We returned to the base camp and ate like kings in the hope of storing as many calories and fats before ascending to higher altitudes. After dinner, we played cards and shared our stories from the road while navigating language barriers to the best of our abilities.

On the second day, the excitement was palpable. We devoured large breakfasts and lunches before our early afternoon departure. We carried heavy packs to the high camp. At 5,400m the camp stood at the edge of the glacier. We arrived exhausted, slipping and sliding on frozen and snow-covered rocks. The guides spoke to each other in Aymara, a language native to Bolivia, and playfully mocked the gringos in broken English. At the high camp, we sat down, dazed and light-headed from the hike. The guides cooked ramen and encouraged us to drink water and coca leaf tea. By six in the evening, we would crawl into our sleeping bags and prepare for the 1 a.m. ascent. 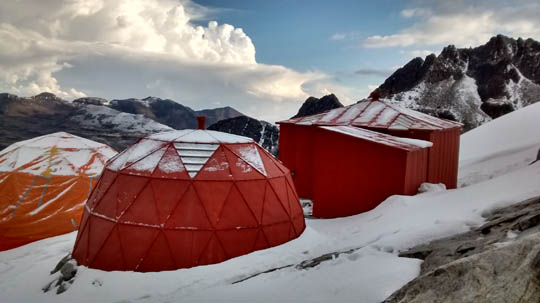 Through the night, headaches and stomach cramps kept us all awake. Sometime around midnight, the guides melted snow for tea and fed us small amounts of bread. Exhaustion from the climb and lack of sleep did not show as we adjusted our harnesses and strapped in the crampons. We shivered with cold and adrenaline.

The glacier glowed eerily in the cold, clear night.

The guide went first. I followed on a short rope with my friend not far behind me. The other travelers in the group were roped in to the other two guides. Other companies had already started for the summit and headlamps danced further up the glacier.

We moved quickly and started passing many groups. We saw many people turn back. On occasional stops, we swigged freezing water and forced ourselves to eat chocolate. Our packs weighed little to nothing but nevertheless each step felt heavy and strained. As the route became steeper, I noticed more and more crevasses on either side. 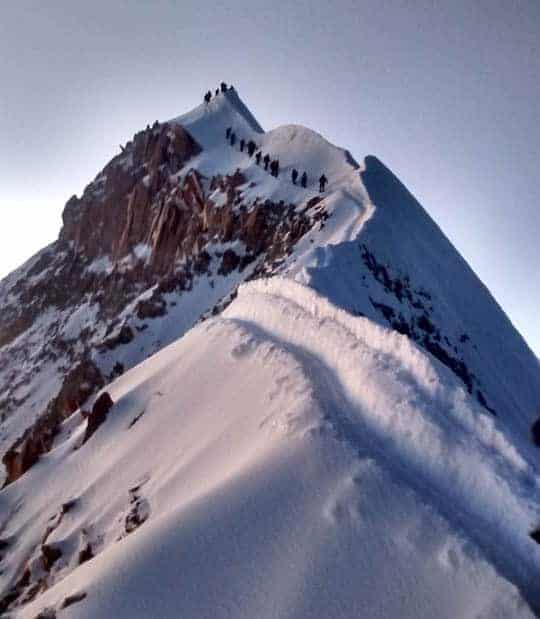 Breathing became progressively more difficulty. I focused on the rhythm of my breath and the crunch of hard snow under my feet. Despite my background as a runner, my legs ached and my chest felt as though it would explode. My lips peeled and my mouth dried.

Memories from the ascent have all seemed to blur together.

We approached the final stretch, only a hundred meters under the summit. The route suddenly became a very narrow ridge, a meter in width, with what appeared to be thousand foot drops to either side. After hours of stepping near crevasses and steep slopes, the guide turned to us and told us to be careful. The mental battle had ended a long time before. Few thoughts now managed to cross my mind. I repeated a simple phrase. Keep moving, trust the guide.

I had not managed to keep track of how many people we passed. Though my friend and I had moved fast and taken few breaks, I imagine someone must have arrived at the peak before us. Suddenly, there is was. A proud little cone standing above the ridge. Behind us, two French professionals followed us along the ridge. We had arrived first.

We barely spoke. All exhaustion seemed to have disappeared in the thin air. In the distance, the Illmani, a slightly higher peak towered over the land. The sky grew lighter. After only a couple minutes, we descended. The glacier burned in the glorious, warm morning light. My mind processed very few things until we had arrived back at the high camp and the crampons came off. Back in my hiking boots, I began to recount the climb. My legs wobbled, my back ached, and my face had characteristic sting of a frozen sunburn. Yet, I was euphoric.

On the drive back to La Paz, the guides chatted cheerfully in the front seats of the jeep. As we crossed the altiplano, Huayna Potosi behind us, the five travelers fell asleep.

Only a couple weeks later, I summited Mt. Soray, a 5,400m that was slightly more technical than Huayna Potosi. The Peruvian peak has been ascended very few times; I believe I’m the youngest person to reach the summit.

One thing became clear. Mountaineering was my new passion. During my travels through South America, I tackled high altitude treks and climbs. I took my passion for the outdoors to a whole new level. Upon returning to the US, I’ve continued my climbing education in the Rocky Mountains, Colorado. 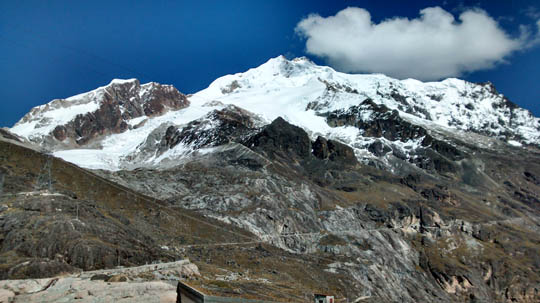 South America unlocked a door to a whole new world. Backpacking South America should be about the freedom to discover and explore; the opportunity to break the ice, so to speak.

If you’re interested in Mountaineering adventures in South America, make sure you check out these articles:

About the Writer: Tomas Aramburu is an eighteen year-old American from Boston, MA. He has just returned from four months of independent travel through South America. He is a gap year student and outdoors enthusiast. Please feel free to contact him with any questions or comments. 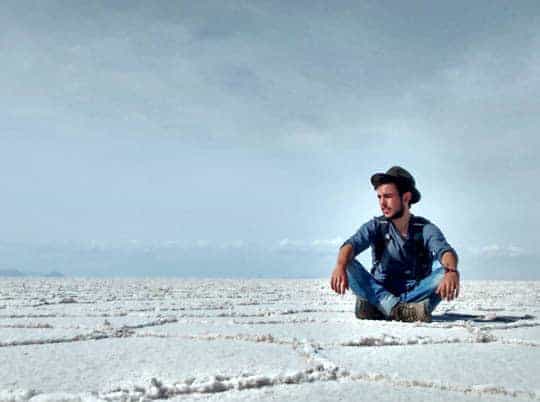 One thought on “Mountaineering in South America: Breaking the Ice in Bolivia and Peru”