For many who visit South America, Bolivia is a country that is actively ignored; jettisoned from travel plans in favour of ‘safer’ and ‘easier’ countries. It’s viewed as a daunting place for many: inaccessible, dangerous, notoriously bad for your stomach, and ultimately, better avoided. Someone once told me that they were “travelling quickly through Bolivia to avoid getting ill” – as if it were possible to speed past any stomach bugs lying in wait.

But Bolivia doesn’t deserve this reputation. It’s a country that merits a slower pace of travel: time to learn Spanish – or even a native language – and become a part of the country, rather than another tourist merely fleeing through. 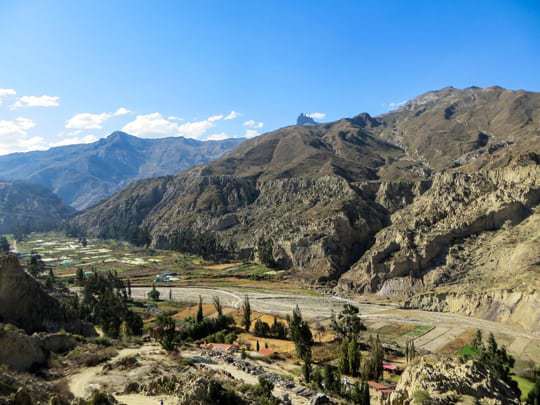 For me, volunteering was one of the most rewarding experiences I have had in the past year and a half of travelling across South America. I’ve discovered that if you’re blessed with enthusiasm and an open, all-embracing mind, you’ll take Bolivia at the value of its warm people and incredible landscapes. More importantly, you’ll discover a fascinating and often over-looked country.

Volunteering is a chance to pause and breathe in your surroundings…

I had already spent seven months volunteering further east in the Bolivian capital Sucre, and with a couple of months as yet unplanned, I had been mulling over the possibility of settling down in one place again. It was for this reason I ended up in El Valle de las Flores (the Valley of Flowers), just South of La Paz, volunteering for a local charity.

I had initially gone to camp at Colibri Camping: a small campsite run by a Bolivian-British family. The website boasted of stunning views across the colourful valley below, and further along the mountains towards the distant haze of La Paz. Having spent a few cold weeks in this frenetic, vibrant, yet ear-splitting city, I was ready for a few golden moments of tranquillity. 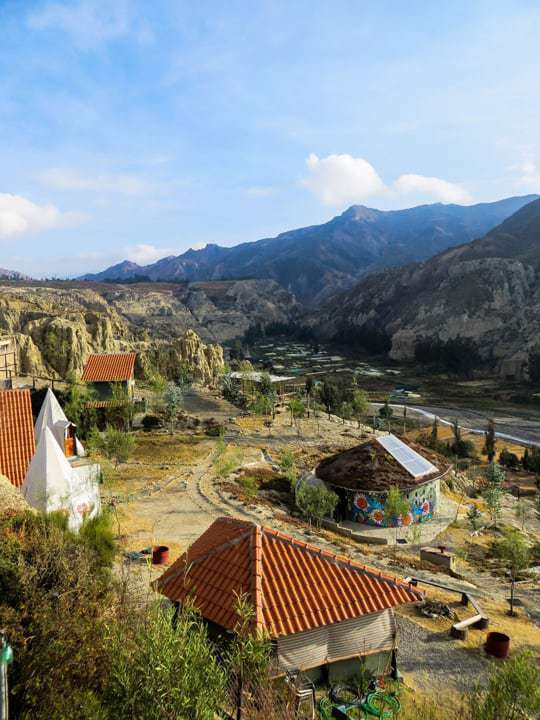 I had only intended to stay for a couple of days, but this all changed after chatting with the owners, Rolando and his wife Emma. I was sold on helping out on the campsite and teaching in the local school as part of their social enterprise Up Close Bolivia. After many months away from home, the chance to pass my days with a family who had blue-tacked pictures of Wallace and Gromit, Mr Bean and Queen Elizabeth II on the kitchen dresser, plus a seemingly unending supply of British tea bags, was also an opportunity I couldn’t pass up.

Volunteering offers a radically new perspective on a place: raw, and more real.

Volunteering has taught me how powerful it can be as an opportunity to come face to face with the reality of Bolivian life. Unlike travelling, where you are often confined to just peering through the grimy bus windows and out into the crumbling adobe of the many communities you pass, when you stop to volunteer, you are invited into those houses, offered a chair, and given a class of refreshing, home-fermented chichi drink.

In Bolivia, rural life remains centred on the concept of a close-knit community, and volunteering offers such a rewarding insight into daily life for the people here. I passed my six weeks chatting with Doña Maria in her yellow-fronted shop on the main road of my new home, Jupapina; riding the trufis (minibuses) alongside the locals to get into the next town; engaging with the students who ranged from silent shyness to constant chatter in English in the school in Mallasa where I taught. Living within the very heart of rural Bolivia, for me, was an experience like no other, and one few visitors get to see. We were so close to the tourist hub of La Paz, yet life here was an utterly different world, unashamedly true to Bolivian rural life and culture. 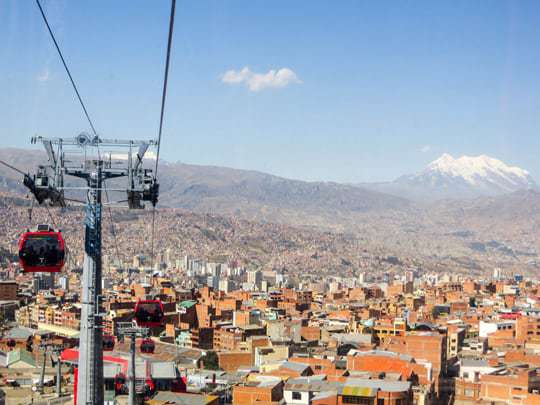 At weekends, myself and the other volunteers would head into the city. La Paz divides opinion for those who visit: it is noisy, dirty and unapologetically so. But living in my own slice of paradise further down the valley and having the chance to pop in for a posh meal or to experience the nightlife was a perfect compromise. Accessible within 40 minutes from my base in the tiny village of Jupapina, La Paz’s administrative capital, with its eclectic mixture of quintessentially Bolivian culture with a growing European edge, was a new experience in a country otherwise so proudly South America. 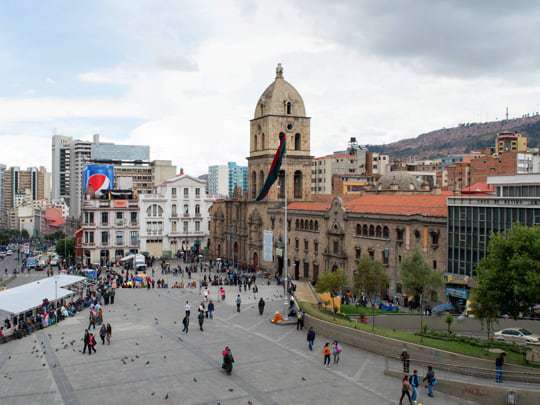 Experiencing rural life is the most rewarding feature of travelling in South America.

My days were spent either promoting the campsite on social media, guiding guests to the tepees and telling them the secrets of catching sight of the viscachas in the evening – the velvet-furred, chinchilla-like rodents who spent dusk on the rocks beneath the campsite – or swapping between Spanish and English as I tried to teach dates, adjectives and confidence in my English classes.

Every moment offered something new: whether it was watching clouds of vibrantly coloured canaries and parrots fluttering across the campsite, or encouraging a tentative few words in English from a normally silent student. Every day was more fulfilling than the previous few months I’d spent on the road because, unlike purely travelling, I felt I was contributing to my surroundings, and they were so readily giving back to me in return. 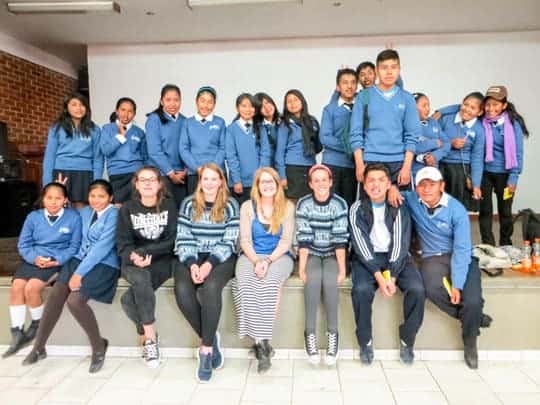 What you learn will from the local people will be unforgettable.

I left Jupapina and the Valley of Flowers to continue my travels: onwards towards Rurrenabaque and then into Peru, where I would be passing my next five months volunteering for the educational charity Latin American Foundation for the Future in Cusco.

I had learned about the aspirations of people in this part of Bolivia, and how the social enterprise Up Close Bolivia was having such a powerful impact: guaranteeing a better start to the lives of local children in the Children’s Centre in Mallasa; supporting the bright, interested young people whom I taught in the school and who finished the six weeks presenting to their peers with levels of confidence in English that many had barely dreamed of but a few weeks previously.

Above all, I learned how friendly and warm the local people in Jupapina were, who never hesitated to speak to me or show how welcome I was as a participant in their community.

As much as I enjoyed my time as a tourist in La Paz, my six weeks volunteering was an experience that made me feel much closer, and more involved, with life in Bolivia. I’ve seen how travel can get you to a new country, but it’s only through volunteering that you will see that country’s heart. 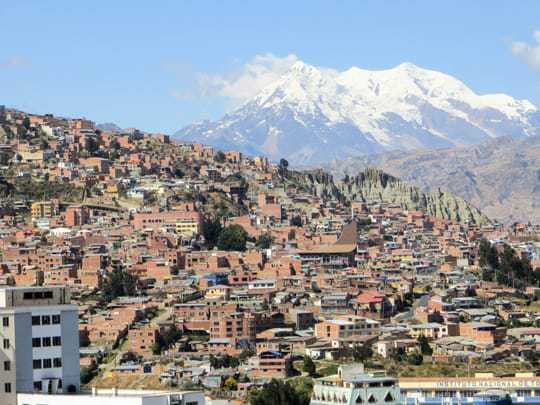 About the writer: A former English teacher in Manchester in the UK, Steph Dyson left her classroom in 2014 to travel, volunteer and live in South America. Since then, she has worked with rural libraries in Sucre, Bolivia, taught English and helped run a campsite in La Paz, Bolivia and delivered workshops to young people in orphanages and albergues in Cusco, Peru. Join her as she shows you how to Travel Adventurously and Volunteer Meaningfully at Worldly Adventurer.