“Nothing has happened in Macondo, nothing has ever happened, and nothing will ever happen. This is a happy town”- Gabriel Garcia Marquez

There is nothing to do in Aracataca. Yet here we are, sitting on a bus beside a Kogi native of Colombia’s northern coastline dangerously speeding up into the Sierra Nevada Mountains, Aracataca our destination.

Three-fourths of the way from Cartagena to Santa Marta the road peels off at Cienaga meandering its way through banana plantations. What is not seen though is what makes this town rich and it starts with something as seemingly simple as bananas.

Yellow fruit a symbol of globalization, a symbol of American exploitation, a catalyst for workers striking against unbearable living conditions, a classic case of resources benefiting the wrong people.  But enough about bananas, we haven’t even made it to Macondo yet. 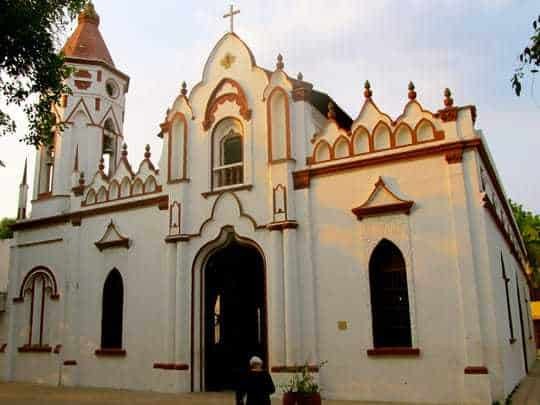 The church of Aracataca’s central plaza.

In 2006 the citizens of Aracataca voted on officially changing the town’s name to Aracataca-Macondo, not enough people turned up to vote, but regardless the two names have become synonymous. Macondo became in many ways the symbol for Latin America when Gabriel Garcia Marquez, master of magical realism, created it as the setting for his Nobel Prize-winning novel, “One Hundred Years of Solitude.” Marquez, grew up in the sleepy Colombian village of Aracataca and when the parallels between his old stomping grounds and the mythical lands of Macondo were drawn people started flocking to this dust-sized town.

One man, in particular, took notice and felt compelled to tell others the stories that dart between fiction and reality, weaving together Marquez’s life and his literary creations. Tim Buendia, a Dutch writer, author, and expert on all things Marquez he has dedicated his life to telling the story of this brilliant author. More so he has dedicated his life to recreating Macondo. Five years ago he created The Gypsy Residence and began using it as his base for day-long history tours which bring travelers around town. Using a mix of scholars works and the locals’ tales to recreate the rich history that has settled with the dust. 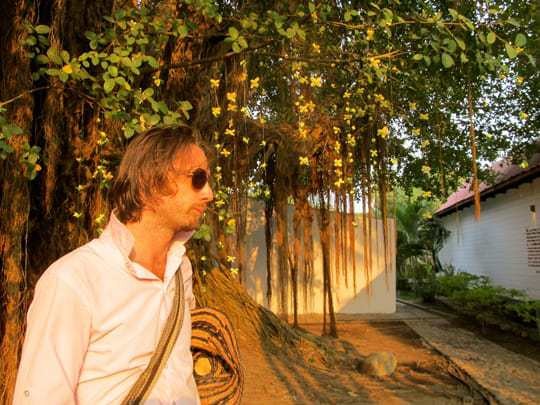 Tim Buendia an expert on all things Marquez.

Aracataca yells the bus driver and we jump off, unsure of where to go. Two backpackers obviously out of place, we wander away from the main plaza in search of The Gypsy Residence. It doesn’t take long for our confused faces to gain attention, nor does it take long for the Aracataca locals to guess where we are going. “Las Mariposas” they point at a string of faded yellow butterflies painted on the street, “siguelos.” We do as we’re told following the trail as it weaves down the road, lost in the immediate pleasure of finding each new splotch of yellow.

Eyes focused we nearly bump into Tim. A character from first glance it is immediately clear we have arrived. Fresh white linen pants, a partially soggy pink button-down top, his long hair peeking out from under his gaucho hat. Ushered inside the hostel we are told to relax, the wake-up call for tomorrow is at 9 am and Tim has enough knowledge crammed inside his seemingly average-sized noggin to easily fill the entire day. 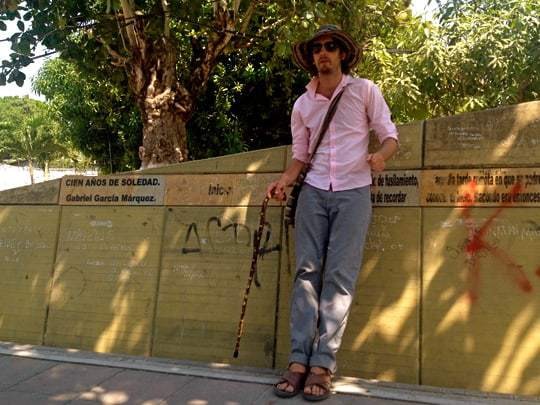 Tim ready to amaze with his ability to make Macando come alive.

There is nothing to do in Aracataca, there is nothing to see either. This is clear from a simple five-minute stroll past the main plaza which takes you from a small white church past a restaurant selling pizza, un sabor nuevo.

There is nothing to see in Aracataca, but there are stories to be told, and this is immediately evident. For Marquez, it was stories that fueled his childhood, told by his grandparents, stories of war, infidelity, pregnancy, gipsies, and thieves.  A trip to Aracataca makes the same reality come to light for the wide-eyed traveler. Of course, a hefty dose of help from Tim is necessary.

Sat at the train station, cement benches on a cement platform a small train rattles past while Buendia’s voice adds color to the landscape. The train was the beginning, the reason that foreign workers started pouring in. The simple vein that connected small-town life with big-city globalization, and we all know what happens when worlds begin to mix and clash. Both magic and tragedy arise. 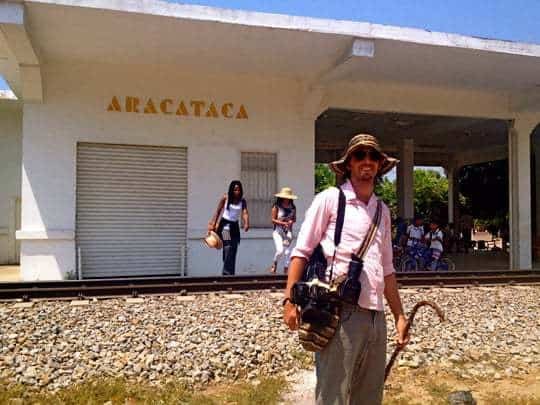 A walk into a forest of African palm oil’s and we find ourselves sat in a rusty carriage. Framework crumbling, red leather seats that have faded due to the extreme heat. Buendia tells us of Marquez’s 2007 visit back to his hometown, his first in years, at 80 years old. He tells us about the overwhelming congregation of people who came to welcome him, the tears that appeared on his aged face, and of his stubborn insistence to ride through the streets not in a police-escorted ambulance, but instead in an open-air carriage, a desire to be connected to the place that inspired him. “This is my town, I’ll do what I like,” he said. This carriage that our group of seven now attentively sits in we are told is the same one Marquez rode in on. We all look down, run our fingers over the weathered material, and marvel at the importance of the vessel that we have all unknowingly clamoured into. 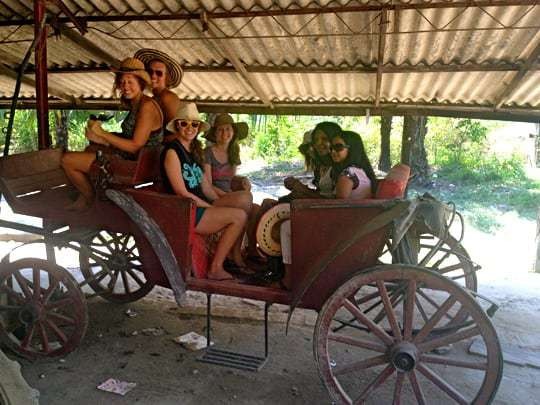 Our group sitting in the carriage that carried Marquez through town during his 2007 visit.

“At that time Macondo was a village of twenty adobe houses, built on the bank of a river of clear water that ran along a bed of polished stones, which were white and enormous, like prehistoric eggs.” starts ‘100 Years of Solitude’ later in the day we walk barefoot through the same river, jump over the prehistoric egg-shaped rocks, submerge into the cool waters and float for a while on our backs past pods of children splashing and playing imaginary games. When we stand again we are told to walk heel first, letting our feet submerge in the sand of the river bed, to create what Buendia calls a massage from mother nature.

A museum exists in the town, a replica of Marquez’s grandparents’ house. It’s the last stop in the day. Sat in his Grandfather’s office the businessman would take breaks to tell the young Marquez about his own life and the world.

Travelers are drawn to South America, and places like Colombia in particular, because it is rich, layered, a place with a history as dense as its arepas. The problem is that at first glance the richness that exists is lost, as travelers we know this but often we can fall victim to believing that the value of a town exists only in its ability to entertain.

Aracataca reminds me that it is through listening that places truly come alive. That through the past we are able to actually connect to the present. I’m not one to claim a love of history, but I do love connecting with people, it’s why I travel. 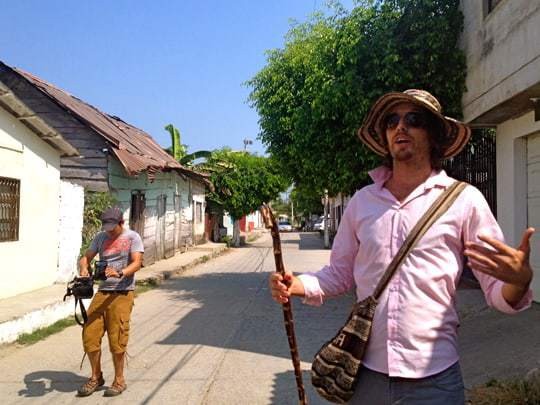 A day spent with Buendia and I realized the error in my ways, when I connect with people I am always eager to understand where they came from, their personal histories creating their depth. The same is true with places and it is up to us as travelers to ask the questions necessary to truly connect with where we are.

Tim Buendia has lived in Aracactaca for five years now, a pass-through town, that many would not give a second glance. Unfortunately, Buendia has decided to move onwards, his intense skill for storytelling leaving Aracataca with him. So what does that mean for us curious backpackers? It means that in Aractaca, and in all places for that matter, it is up to us to ask questions. It is up to us to get curious. It is up to us to wonder what stories float through the air like yellow butterflies creating the places that lay before us. We can travel over and under anywhere we like in this world, but until we take the time to get to know the places we travel to we have missed the point entirely.

Originally from Massachusetts in the US, Tyler has always harboured a desire to travel. She spent three months in Cusco, Peru on a study-abroad program before moving to Thailand to teach English. After that, she flew back to Latin America to backpack the continent whilst writing for South America Backpacker Magazine. After a stint working in Tanzania, Africa, she is now back home in the US, living in Boston. 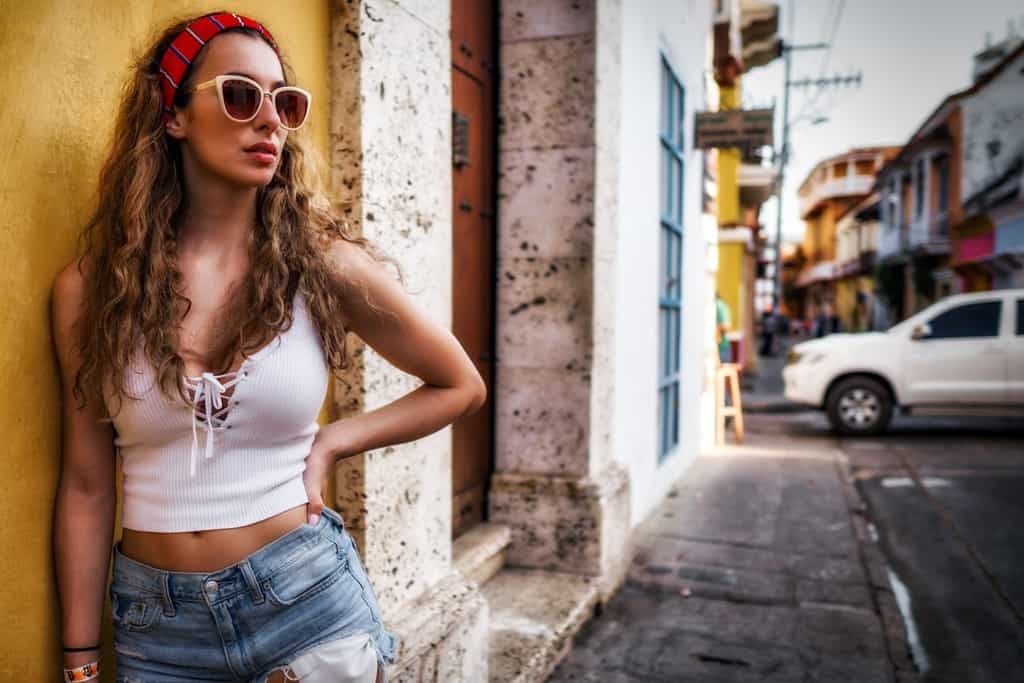 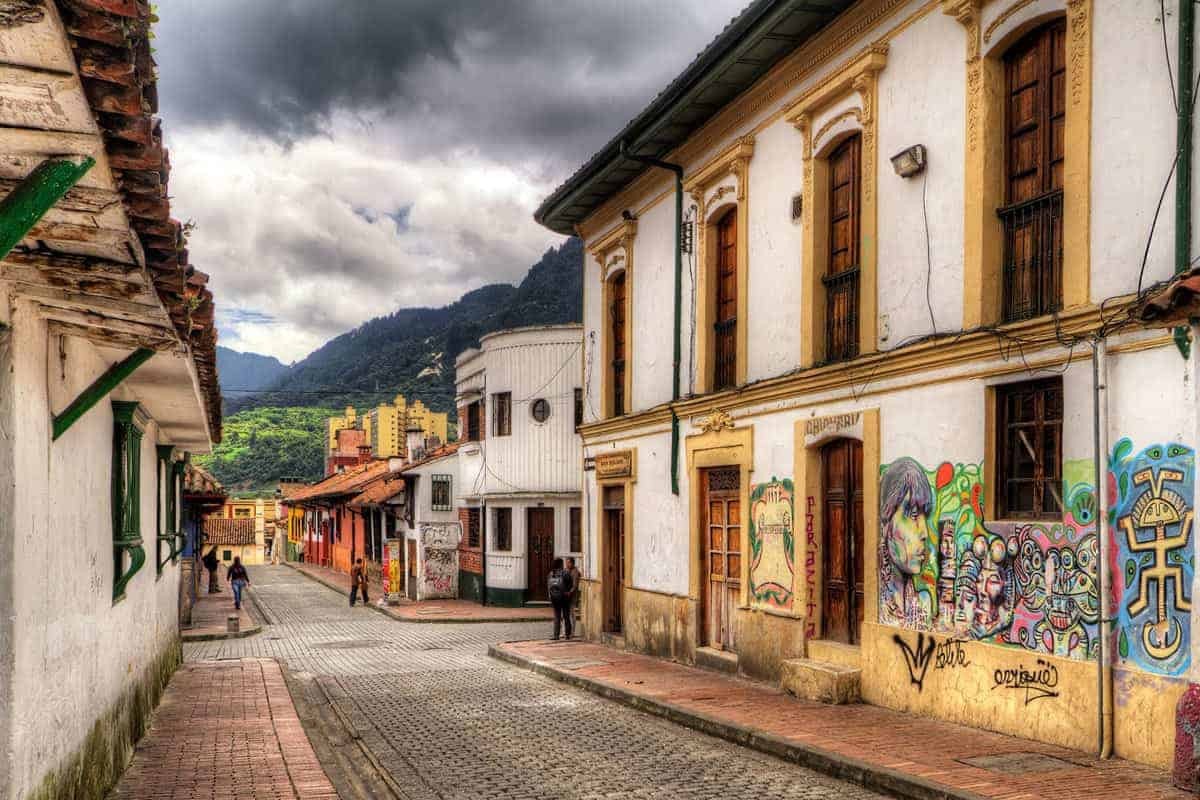 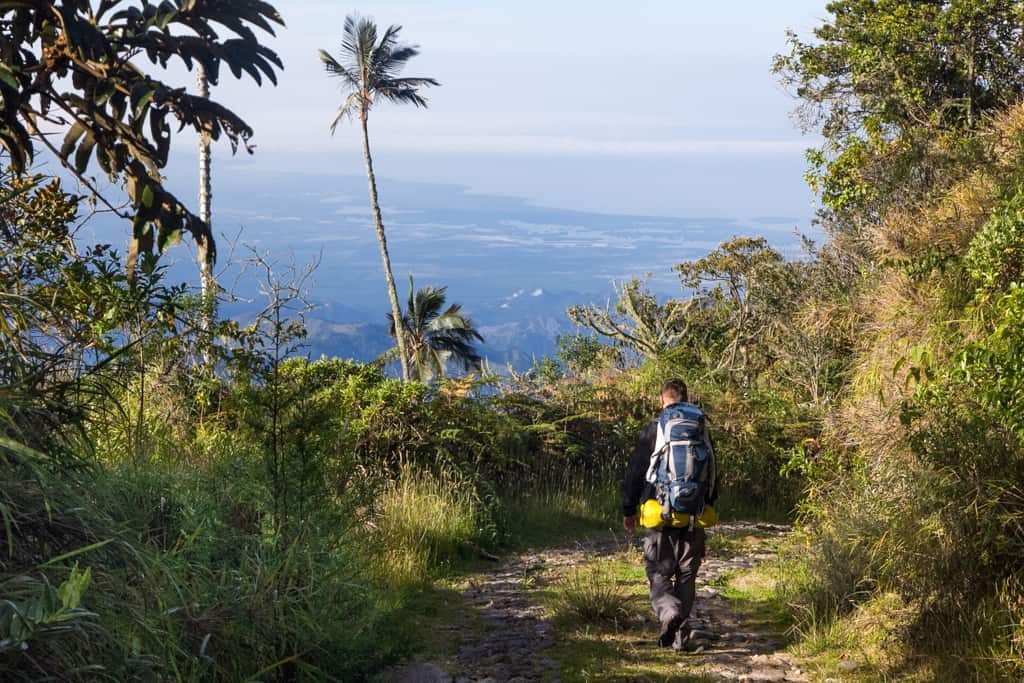 1 thought on “Colombia is Magical Realism, a Journey with Tim Buendia to Aracataca-Macondo”