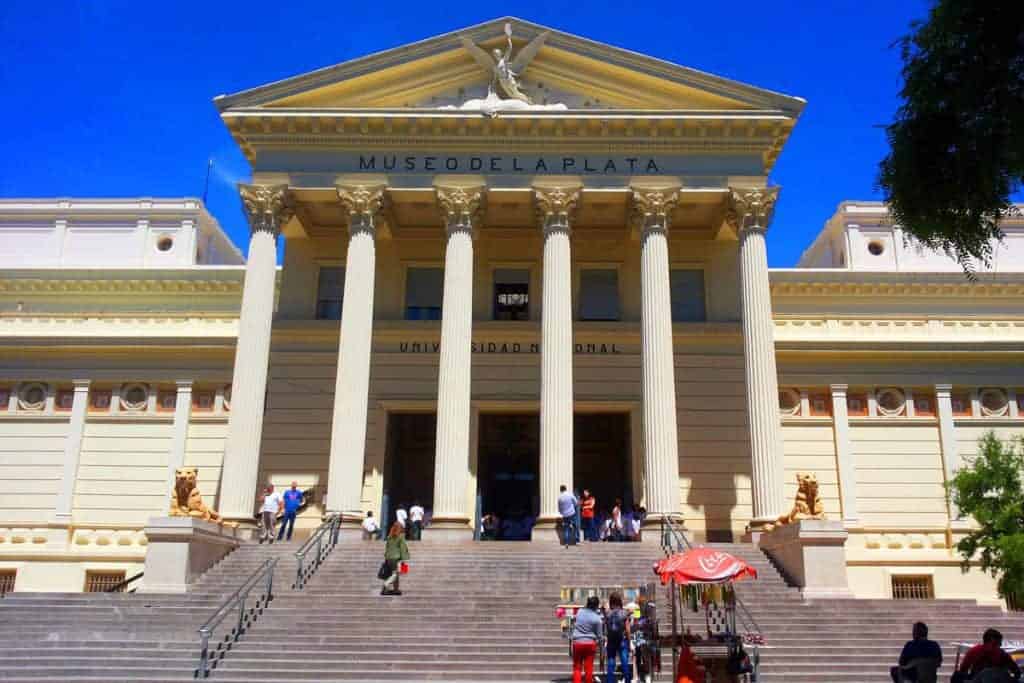 Just half an hour away from Buenos Aires is the city of La Plata which was planned and developed in an extremely practical and organized manner to serve as the provincial capital of the Buenos Aires province after Buenos Aires was federalized in 1880. Further Reading: Backpacking in Argentina La Plata (meaning The silver) is not only famous worldwide for its own ‘very rational’ structure, it is also one of the centers of Latin America culture, with a lot of theatres, museums and a prestigious University – which suffered a lot during the last dictatorship.

The city’s structure is based upon a big square which is divided North/South and East/West by two diagonals. Roads and avenues inside the square make a regular grid interrupted only by other diagonals: every six roads (calles) you’ll stumble upon an avenue (avenida), where an avenue meets another you’ll find a square. In the very centre of the city stands Plaza Moreno: the Main Square which hosts a big cathedral and the city hall, el cabildo.

It’s not a city where backpackers usually tread, with the exciting charms of Buenos Aires being just half an hour away – but if you find yourself in this pleasant city, even for just a day trip to experience a very local part of Argentina – here’s a helpful travel guide!

Where to stay in La Plata

Inside the central square (from 120 to 31 and from 32 to 72) there are a lot of ‘backpacker friendly’ places to stay. The area has plenty of restaurants, theaters, nightlife, parks and it’s quite safe to walk around at night. Due to the city’s proximity to Buenos Aires, there are not many ‘backpacker’ hostels as such, but there are a high number of apartments ready for rent and a lot of couchsurfers! Some of your best accommodation options are: La Plata Hostel is one of the better options at the lower end of the price range. Comfy dorm beds cost around $10 USD. The staff are great, though the breakfast leaves a little to be desired. The coffee and tea are, by all accounts, particularly poor. One guest even complained that the bread was mouldy. Frankville Hostel is the other backpacker hostel worth mentioning. It’s in a good location and the staff are friendly. As was the case with La Plata Hostel, Frankville is not the most glamorous place you’ll ever stay in, but it’s one of the better budget options at $13 USD for a dorm bed. If you’re in a group, it’s almost certainly going to be a better idea to rent out an apartment, which will save you money in most cases. Have a look at these: La Plata Centro is a little apartment which’ll fit four people (two on a proper bed, two on a sofa bed) for $30. It would be a bit of a squeeze for four, in all honesty, but the option is there if you’re looking to scrimp and save. XV Apartamentos are considerably bigger and very swish inside. Prices start at just under $40 USD. Casa del Parque is, again, much bigger, offering two rooms. Two people can stay for $40, 4 people is more like $55. For more accommodation options in La Plata, click here!

Things to do in La Plata

La Plata has very interesting architecture and it is a very walkable city. Wander up and down its big sidewalks, enjoying the beautifully-designed and varied buildings of the “eje fundacional” (foundational axis). Check out La Plata Casa Curutchet, the only house in all Latin America designed by the famous Swiss-French architect Le Corbusier – often hailed as one of the pioneers of modern architecture.

East of the centre, you’ll find one of the most beautiful places in La Plata: el bosque. It’s the green lung of the capital and hosts the stadium of the local football team ‘Gymnasia y Esgrima La Plata’. Here, you will also find the museum of natural science, the zoological gardens and the observatory. Every day thousands of Argentinian locals step into the bosque to enjoy a mate, have a run, study, relax or play a picadito, an informal football match in the green environment. Plants and flowers indigenous to all different parts of South America find their home here in el bosque thanks to the work of a dedicated local scientific community.

La Plata has one of the most important universities in Latin America and also a beautiful Museum of Natural Science and, don’t forget – the Observatory. The observatory is open most days and you can visit with a guide. The visit includes the building (1883, pure Victorian style), the museum of astronomy and geophysics and the room of the telescope, “El gran Ecuatorial”.

Enjoy a mate, the typical Argentinian ‘ritual’ drink – a must try whilst in the country! Drinking mate is a very popular activity and one of the best way to socialize with locals. All you need is a sunny day, (no matter the season), and you’ll soon find a lot of people ready to relax in Plaza Moreno, Plaza Malvinas or El Bosque. Ask a local how to prepare, serve and sip mate, they will joyfully share their passion with you!

Football is a religion in Argentina and if you’re looking for some local atmosphere, La Plata is the place to go! Gymnasia y Esgrima La Plata and Estudiantes de La Plata are two of Argentina’s biggest football teams and they challenge each other in one of the country most competitive ‘Derbys’: El Clasico Platense. When Lobo and Pincha meet each other it’s a special day for the city and you’ll see thousands of people wearing the relevant colours heading off to watch the match and parade by calle 7. On Calle 7, here you’ll find a wonderful party, that’s sometimes a bit dangerous! Be careful with the barra brava!

La Plata enjoys a very multicultural environment with lots of different types of people from arty to intellectual and hippie types mixing in this small city. In the very centre of the city there are a lot of pubs, classy bars and upper-class restaurants, the further you head out to the suburbs, you’ll find more rock and indie bars with a bit more of a shady look. One of the student’s favourites is the Old Station District: here you’ll find many cool charismatic pubs and some great live music.

Within just a few minutes from La Plata you can find lots of places to enjoy a day in the countryside, (un dia de campo): try horse riding, eat asado, relax in a swimming pool or enjoy aviation sports like hang gliding. Ask at your hostel’s reception for activities!

The peaceful Rio Santiago, just a few minutes from the city

By Bus From Buenos Aires, it’s approximately a one-hour journey if you take one of the services “por autopista” (by highway). The two main bus services are Plaza and Costera and leave Buenos Aires every 20 or 30 minutes during all the day, from 5.30 am to 22.30 pm. You can take the bus just outside of the Retiro bus station, in Plaza Miserere (Once district) or just get on it in other stops. Main stops are available here. Other Argentinian cities offer bus service to La Plata but the majority of the rides, especially from the north, are not direct and most of them stop in Retiro, Buenos Aires. By Train The only train connection available from La Plata is from and to Buenos Aires and the Gran Buenos Aires: it’s very cheap and frequent.

Where to head next?

Buenos Aires: From Plaza de Mayo to La Boca, the beating heart of Argentina in French attire, simply a MUST! Mar del Plata: Beautiful Argentinian city on the Atlantic coast where you can relax, have fun and enjoy one of the favourite Argentinian holiday places. Bariloche: The district of the ‘seven lakes’ where you can experience the southern Andes cool alpine landscape. Trek, ski, drink wine and taste a very good chocolate. About the Writer: My name is Greg, I’m an Italian guy passionate for everything that flies. I graduated in 2011 and worked till 2013 in the informatics field, then I join a Panamanian woodworking company for a different job and started traveling through Latin America. In 2014 I started a new career in Argentina: I’m currently trying to be an airplane pilot! Read my blog (only in Italian) here!