Beach bumming in Brazil was blissful but seriously blowing the budget. Johnny and I had to detour. With my bikini begrudgingly relegated to the bottom of my backpack, we headed for Bolivia.

I didn’t know much about Bolivia except it is landlocked (bummer), cheap (winner) and President Morales shuns Armani suits and instead dons a stripy alpaca jumper when meeting world leaders.

My guidebook revealed that although Bolivia may be one of the poorest countries in South America it’s rich in superlatives, boasting the world’s highest capital city; La Paz, navigable lake; Lake Titicaca, golf course, football stadium and ski-run.

El Parque Cretácico possesses the world’s largest and most diverse collection of dinosaur tracks and Yungas Road is considered the world’s most dangerous.

Among these impressive superlatives lies an incredible landscape; the Bolivian Altiplano (high plain/plateau), only beaten in size by Tibetan high plateaus. That’s where we headed.

Shortly after arriving we began a four day trip in a Toyota 4×4 to Uyuni traversing the southwest Altiplano, with Tupiza Tours. Our group included Swiss backpackers Julie and Christina, our very short Bolivian driver Rafael and even shorter Bolivian cook Monica.

Aboard the 4X4, we climbed the hills of the Cordillera de Lipez out of Tupiza pausing to look at the spectacular moonscape of Valle de la Luna and El Sillar, before we disappeared into the clouds and mist. 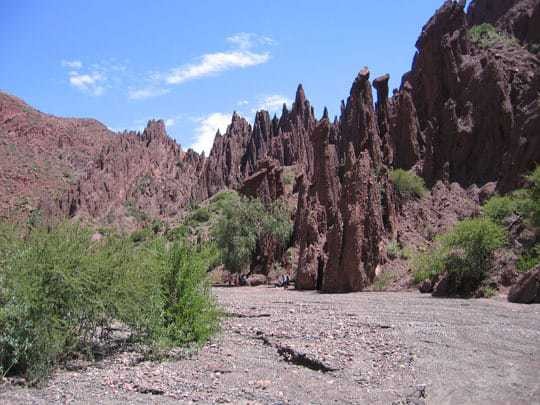 My attention was seized by the steep and narrowing gravel track we were ascending. Unnervingly, the sheer drops appeared to disappear underneath us.

A small landslide blocked part of the track causing Rafael to drive very close to the edge. Stones and earth crumbled away from underneath the tyres. I held my breath and gripped Johnny’s hand.

Fortunately, Rafael drove expertly through. Perhaps owing to relief, he turned on the cassette tape. Bonnie Tyler’s Total Eclipse of the Heart filled the tense silence.

When the 4×4 got stuck in mud, we collected tussock grasses for tyre traction. Walking only a few paces took my breath away. My heart pumped hard in my chest whilst my skull crushed my throbbing brain.

I noticed Johnny holding his head, ‘You suffering too?’

‘Yeah, me head’s killin me, gonna try the coca-leaves,’ he leaned into the 4×4 and retrieved the bag bought in Tupiza market for 20p. When in Rome! Rafael showed us the process.

Place a tiny piece of quinoa ash (ilipta) into a bundle of leaves. Place the bundle between your cheek and teeth then macerate, don’t chew. We grinned, revealing green-stained teeth. Rather disgusting but our headaches soon abated.

For the next four days Rafael, Monica, Johnny and I resembled chipmunks. Julie and Christina, although suffering, shot us disgusted looks like we were druggies. 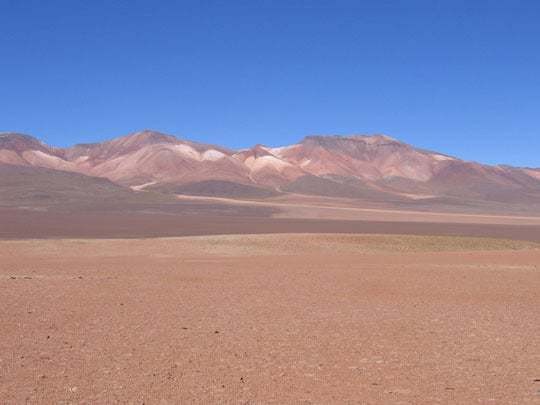 Eventually, the 4×4 came unstuck, we continued through creeks, over passes and across huge empty plains. The only sign of life was proud looking llamas with red ribbons tied to their ears and a hardy man roaming the middle of nowhere.

Rafael stopped and pointed at a moss-like plant, the only greenery around.

Rafael said something but his Spanish was far too rapid for my novice ears.

I tried to explain, ‘Mi Español es terrible, estoy…..,’ I paused. I couldn’t remember the Spanish word for embarrassed. I thought add an ‘a’, make it sound Spanish.

Rafael took off his baseball cap, scratched his head and looked at my stomach. He made big belly gestures and pointed at mine.

I now tend to consult my phrase-book first.

We stopped in a small isolated village of adobe huts made from mud bricks with thatched roofs.

We translated this into 4,678 m.a.s.l. At this elevation, we spent the night in an adobe hut in the foothills of the snow covered Cerro San Antonio. Monica prepared llama stew and coca-leaf tea.

Strangely neither she nor Rafael would join us to eat. Afterwards, we retired to bed fully dressed under a mountain of blankets. It was so cold I shivered into on-off sleep nursing a throbbing headache. Halfway through the night Christina and Julie begged me to share our coca-leaves (hmm).

After breakfast and many medicating cups of mate de coca (coca leaf tea), we departed. It was clear blue skies and bright sunshine but very chilly. At Puebla Fantasma, an abandoned mining village, we saw a colony of viscachas. They’re related to chinchillas but look more like fat furry rabbits with long tails.

We entered Eduardo Avaroa Andean Fauna National Reserve, elevation 4,200-5,400 m.a.s.l. The landscape became increasingly barren. Rafael muted ‘Turn around bright eyes…,’(Not sure if it was the altitude or the song causing my headache). 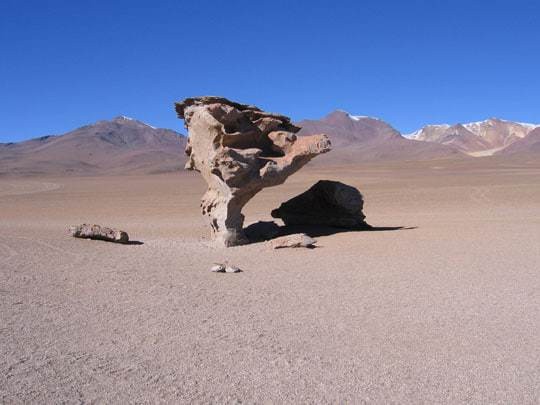 You can see why this extensive and desolate desert has earned its name. The Mars-like pinkish shale and stone ground is dotted with curious rock sculptures resembling Salvador Dalí’s paintings.

You can almost see clocks and saddles melting into the surreal landscape. Mountains surrounded us like a super-bowl, painted with layers and swirls in astonishing shades of brown, orange, red, pink, yellow, purple and white, contrasting vividly with the most unpolluted clearest blue sky.

I felt we were the only life in this isolated otherworld until a few shy slender vicuñas appeared, a relative of llamas, scraping an existence from minimal vegetation. I got out the 4×4 to take photos.

The icy sandy wind blasted across the desert stinging any exposed skin. It bent me double and whipped Johnny’s sunglasses off. We quickly retreated to the relative comforts of the 4×4 to enjoy the view and take photos with a steadier hand. 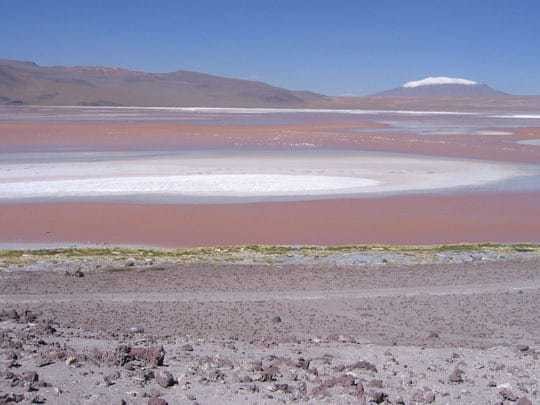 Johnny and I braved breathlessness and headache intensification by walking to the shore of beautiful Laguna Verde salt lake to pose stiff and cold with macerating chipmunk cheeks.

The lake’s colour changed between milky turquoise and emerald green when the wind disturbed the salts and minerals in the water. The salt-encrusted rim resembled foamy waves bubbling onto a beach.

Rearing up like a pyramid, the superb sulphur streaked cone of Vulcán Lincacabur provided an intimidating backdrop. Coldness and a splitting head forced returning to the 4×4 and regrettably Bonnie Tyler.

While Monica prepared lunch we could bathe in the 30ºC geothermal springs called Termas de Polques. It looked warm and inviting. I excitedly began recovering my bikini, but seeing the few brave or stupid bathers getting out and shivering to near death, put a stop to that.

After lunch, we strolled amidst the lively volcanic activity of Sol de Mañana, a geothermal field spawning pools of bubbling greyish mud and boiling water.

The lack of safety railings meant you can get perilously close and disappear through the ground to a 1000ºC death. Luckily, the sulphur smell alone was enough to keep a safe distance.

Laguna Colorado is another stunning salt lake stained red by sediments and algae which contrasted beautifully with the brilliant white borax islands. A flamboyance of pink flamingos flapped, skidded and splashed clumsily onto the lake before feeding gracefully on its micro-organisms.

That evening, at the remote Hostal Huayllajara, Johnny and I enjoyed the orangey-red sun setting and stars appearing. The Milky Way twinkled like a cloud of diamonds in a black velvety sky. I lit a cigarette.

Due to the lack of oxygen, I was still smoking it half an hour later. I gave up and extinguished it as freezing temperatures forced us inside. That night was the coldest; even the mountain of blankets didn’t warm me.

I shivered asleep dreaming of beach-bumming but an excruciating headache woke me. Unable to brew mate de coca or macerate them in case I choked, I reached for the paracetamol.

I heard Johnny moan, ‘We’ve come on holiday by mistake.’

The Cerro de Siete Colores, marvellous mountains in multiple tints of ochre sprinkled with snow provided a splendid backdrop, but, active Vulcán Ollaguespewing smoke from its left flank was an ominous reminder of our hostile environment.

On our ultimate morning, an apocalyptic white light spread across the horizon. The Salar de Uyuni; the world’s largest salt flat at around 4,085 square miles.

In February it’s covered by shallow flood-water. Mountains, salt-mounds, clouds and blue sky reflected perfectly in the enormous natural mirror, everything seemed to be psychedelically floating. Areas where water had evaporated revealed a pure white surface patterned by a hexagonal jigsaw of fine salt lines. 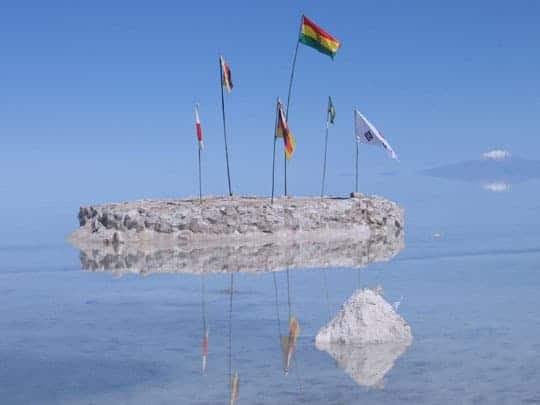 Our last lunch was grilled llama and quinoa. Rafael and Monica finally joined us. We ate at a salt hotel, served on salt-block tables, sat on salt-block stools. Seasoning anyone?

Headaches finally fading we arrived in Uyuni. We said goodbye to each other and Bonnie Tyler. I took my first shower in four days then joined the Carnival celebrations just in time to see 100 skeletons dancing down the street to Michael Jackson’s Thriller.

And what a thriller it had been; well worth ditching the bikini for an oxygen deprived trip to a cold and desolate treasure. Now for a drink to bring that headache back! 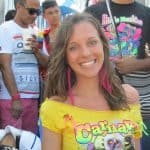