Just a short boat ride from the Argentinian town of Posadas, the Paraguayan city of Encarnación is a pleasant, modern and clean city that doesn’t really boast that much to do for backpackers. Most backpackers will pay a visit to Encarnación solely for the purpose of making the short journey to the nearby village of Trinidad to see the ruins of two interesting ancient Jesuit Missions, dating back to the 17th century.

* The Jesuits also known as ‘The Priests of the Society of Jesus’ were a branch of the Roman Catholic Church who tried to bring Catholicism to South America during the 16th and 17th centuries, particularly to the Guaraní tribe of people living in central South America.

As well as religion, the Jesuits brought literacy, skills and trading knowledge to the indigenous population. Over 150 years, many of the ‘missions’ grew into small cities or ‘reducciónes’ and in some ways, the indigenous tribes living in the missions were protected by the Jesuits from the exploitation of negative European influences.

Through carpentry, craftsmanship and trade the Missions developed into their own small economies and the Spanish government started to worry. The Missions were attacked and the Jesuits were driven out by the Spanish crown in 1756 as it was feared they had become too powerful. Their story is a complicated and interesting one!

The village of Trinidad is located 30km from the city of Encarnación along Ruta 6. The ruins of Jesuit Missions, La Santisima Trinidad de Parana and Jesus de Tavarangue make the UNESCO World Heritage List.

Trinidad boasts the ruins of the Jesuit Missions of La Santísima Trinidad de Paraná and Jesús de Tavarangue, which you will find get their place and picture in many guide books, and they are probably the main tourist attraction in Paraguay. Despite this, tourism is very little, and you won’t be queuing to get in.

The missions were founded in 1609 and were worked on and developed for over 150 years, until the Jesuits were booted out of Paraguay in 1756. The Tavarangue has a small museum on its creation where you can learn more about the Jesuits and the part they played in Paraguayan history.

Jesus De Missions La Santisma Trinidad De Parana is a 16th century settlement that includes a main yard, an orchard, a crypt and entrance area. Quiet but a spacious area, this is around 40 minutes from Ecarnacion.

The Jesuit Missions of Paraguay are considered some of the most impressive and well-preserved creations of the religious work of the Jesuits anywhere in the world. They were declared UNESCO World Heritage Sites in 1993. 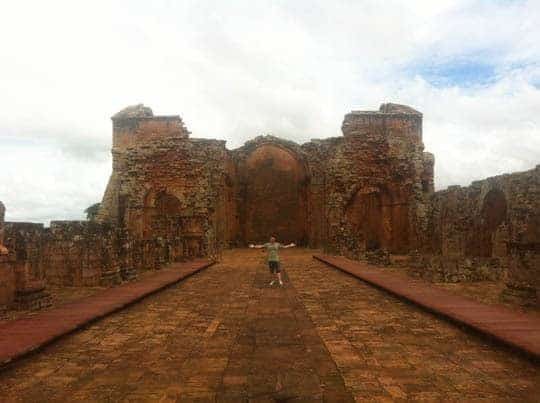 Getting to the mission from Encarnación:  Take the local bus from Ecarnación bus station, which will take around 40 minutes to get there and cost you 10 thousand Paraguayan pesos one way. Or if you’re feeling adventurous, you can even hitchhike; locals will undoubtedly know where the missions lie. It’s not hard to find with signs with only a few roads that are available.

Where to go next?

Ecarnacion and Trinidad are on the South Boarder of Paraguay with Argentina.