São Paulo is a concrete jungle of business at face value, but after time in this Latin America metropolis, but it’s hard not to leave with a new appreciation. This city is home to 20 million people!

Read more about backpacking in Brazil!

Over twice the size of New York City, it has everything any giant city would have. This city is also home to the largest population of Japanese people outside of Japan and a thriving Italian community. These influences further add to the diverse cultural fabric of this city. 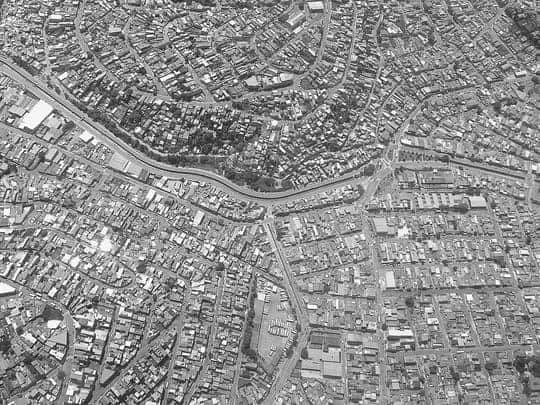 São Paulo from the aeroplane

São Paulo is a place tourists do not prioritize, this is for good reason given the other natural and social offerings of Brazil. While here enjoy the many hours you will inevitably spend in traffic between your destinations.

I found these rides provide a wonderful insight into the people of Brazil and the hustle that is part of life in this hot, gigantic Latin city. 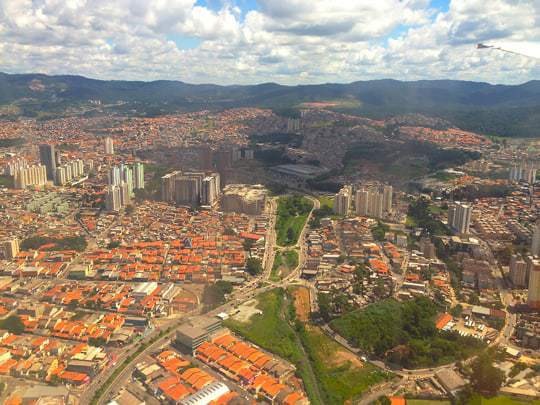 Things to do in São Paulo

Things to check out while in town include the Soccer Museum and several markets. The CEASA Market is a center of commerce for restaurants and is the largest of its kind in all of Latin America. This market becomes even more lively on the weekends when flower stands set up.

The more upscale, indoor market, Mercado Municipal is also worth a visit. It is a great place to pick up foodie souvenirs and watch the fish, meats and cheeses get sliced up and ready for distribution.

If possible, arrive hungry and check out one of the restaurants on the upper deck of the market. Because it is housed in an old train station, it’s quite a lovely place to sit, eat, and take in the atmosphere. 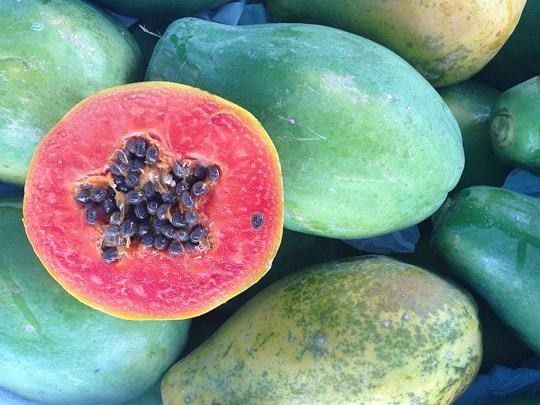 Check out the fresh food offerings at Mercado Municipal

Vila Madalena was by far my favorite neighborhood in all of São Paulo. Reminiscent of San Francisco, this hipster hub is home to countless cool bars, edgy galleries, trendy shops and beautiful restaurants. This place is worth a half-day stroll and you will likely end up returning over and over for good meals.

A favorite shop in this neighborhood was Farm Harmonica. This Bohemian paradise is worth visiting just for its green architecture. While in the neighborhood, take a stroll down Batman Alley, the center of street art culture in São Paulo. 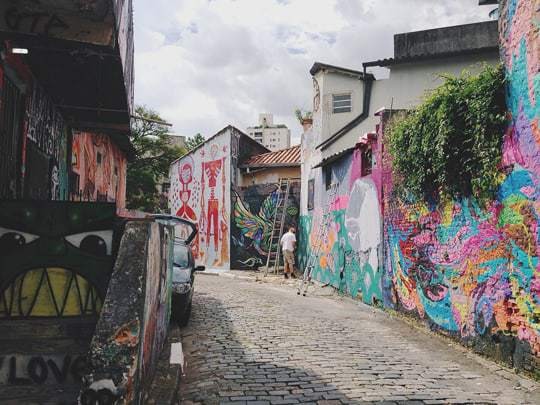 Little Tokyo is also worth a visit. With the largest population of Japanese people outside of Japan, this part of town has unique shops and delicious restaurants.

I was surprised at how authentic this part of town felt. While here be sure to eat sushi, which is served in cones in São Paulo, and try the bakeries which are rumored to be some of the best in the city. 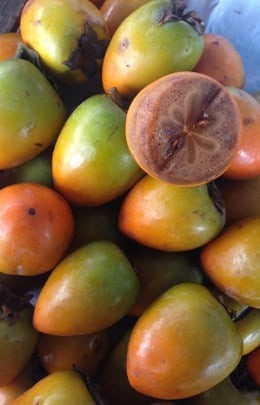 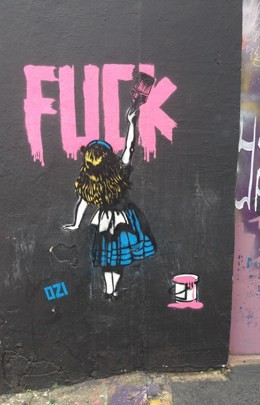 Where to Stay in São Paulo

As a backpacker in São Paulo, all you need to know is that you should stick with Vila Madalena. This is the part of town that feels safe and has the most character.

Vila Madalena is young, vibrant and full of hopping bars, hipster coffee shops and tons of delicious eats. The nightlife here goes all night and there are plenty of trendy galleries and graffiti-clad streets to keep your attention by day.

There are a number of hostels to check out here, but I find Airbnb to be a great bet in a large city as well. São Paulo Hostel Club looked especially intriguing if you’re into the communal room situation. Places in this neighborhood should have good Metro access and taxis are abundant.

Other places to check out in Vila Madalena: 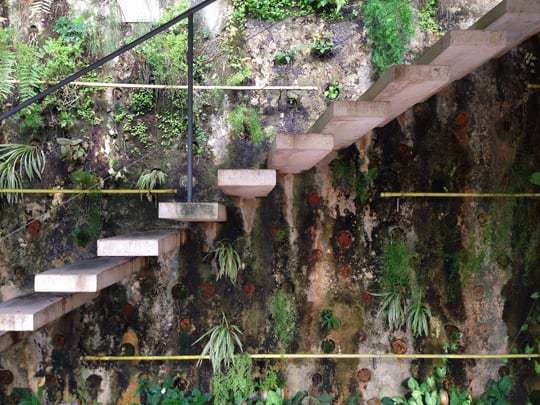 São Paulo Food: What to Indulge In?

Eating was the hands down the highlight of my time in this landlocked Brazilian city. While here, drink cachaça (sugar cane hard liquor) and try to sneak in a sampling if possible.

If you are in the Vila Madalena neighborhood check out Emporio Sangarana for this. This is the key ingredient in caipirinhas, which should be tried in their various fruit blended forms.

Cheese balls tend to be another staple in Brazil. It is somewhat shocking to see the amount of cheese and bread consumed in combination, enough to even impress a Wisconsin gal.

While on the theme of high-calorie balls, do not miss the chocolate confections. These fudge like spheres, in fact, come in many sweet flavors and are just more than bite-sized.

These are well worth the calories and a great reminder of the sugar cane culture the country is built upon. Also, don’t miss the many great wood-fired pizza and gelato options compliments of the strong Italian presence in the city. Bacio di Latte quite possibly served the best gelato I have ever had in my entire life– and I lived in Italy.

Other than these ideas, eat fruit! Tons of it! Walk the markets and taste all the exotic ones too abundant to name here. Acai ni tigela is a great and healthy lunch treat, taken with banana and granola, be sure not to miss it! 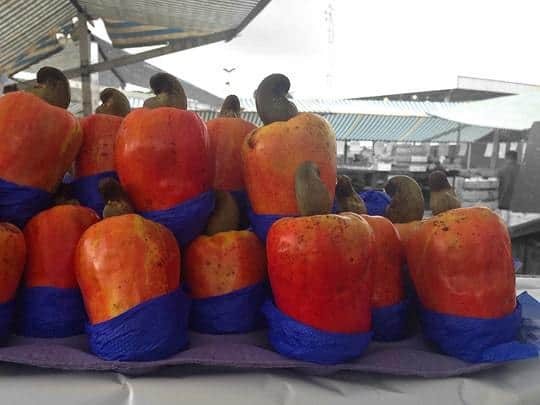 Restaurant-wise, I was in heaven in São Paulo! The best meal I had in the city was probably at Sal Gastronomica. This place is operated by another contending world leader in cooking, well-known chef, Paul Henrique Fogaca.

While here enjoy awesome ceviche, octopus and friend cheeses in the courtyard of an art gallery near Paulista Avenue. This place does haute cuisine in a charming atmosphere, clad with tattoos and modern design.

Another noteworthy establishment to check out includes Bein. This restaurant is only open for lunch but serves meals designed to combat the impacts of urban living (gastro remedies for stress, exhaustion, pollution, etc.).

Ola is a fabulous fusion restaurant blending Mexican with Thai flavors. The Brazilian influence is notable as well. The highlight of this menu for me, however, was the caipirinha selection with flavor combinations like mango ginger, watermelon ginger, cashew nut and honey lime.

Spot Cafe has managed to be trendy for over ten years in this ever-evolving city. Known for the best-looking staff of aspiring actors and actresses it is a hub of beautiful and well-dressed people, and the food isn’t bad either.

Famed Chef Alex Atala, D.O.M. was named one of Time Magazine’s 100 Most Influential People in the World in 2014 for taking on “the enormous task of shaping a better food culture for Latin America.

His philosophy of using native Brazilian ingredients in haute cuisine has mesmerized the continent.” He happened to be the childhood friend of a woman I was working with in São Paulo and we were able to get a table at Dalva e Dito, the more rustic, provincial version of D.O.M.

This place has outstanding appetizers and caipirinhas at very accessible price points. I’d suggest a kiwi caipirinha with sake.

If you are into coffee, I’d suggest visiting a place called Coffee Lab in Vila Madalena. This charming hipster hangout is a wonderful place to learn more about coffee in general and the forms it takes in Brazil. Where to Go Next?

This destination guide was written by:

Jen Seiser a designer and lifetime explorer. While traveling she strives to experience the world in an intimate way off the beaten track –interacting with people and places via colors, textures, pictures, patterns, products and emotions. Follow her travel adventures on Instagram @thejourneynotes and check out details of other destinations on her travel blog, http://www.thejourneynotes.com/.