All eyes are on Brazil as it gears up for the World Cup in June. Soon thousands of fans will be descending upon its shores, many of whom will be heading to Brazil’s most vibrant and alluring city, Rio de Janeiro – otherwise know as a cidade maravilhosa, the marvelous city.

The nickname is well deserved. This is a city where beautiful mountains clash dramatically with the sea, and sprawling favelas squeeze inbetween the crashing waves, beach boulevards, penthouse apartments, and the dizzying lush green heights. 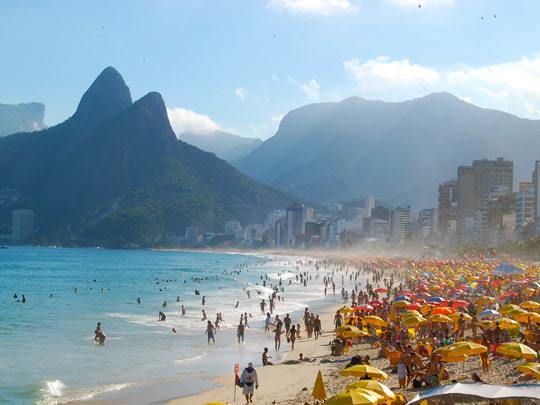 The luscious beaches of Ipanema and Copacabana quench local Carioca and tourist thirst with fresh coconut water and ice cold beers. Music resounds throughout the city, on the beach, from bars and restaurants, apartments and onto the street itself.

Jesus looks down from above, majestic in his immense size, constantly watching the flow of traffic along the coast and through the buzzing yet crumbling colonial centre. Here mighty cathedrals stand between six lanes of erratic traffic, and cultural centres muscle their way into dilapidated nineteenth century buildings, modern concrete structures and shopping malls.

This is a city that takes hold of your imagination with a firm grip and doesn’t let go. So don’t miss out on all that Rio has to offer with this list of the top sights, music and dancing, activities and eats. 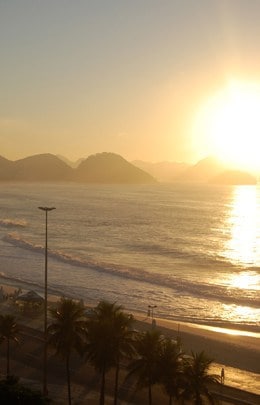 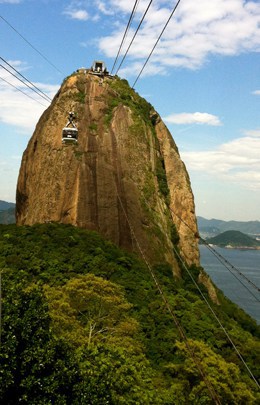 1) Delight in the dramatic views from Pão De Açúcar, Sugar Loaf Mountain. You can get a cable car all the way up. Or, if you are feeling adventurous, you can climb the first little hill called Urca and then jump on the cable car up to the top of Sugar Loaf from there. Without a doubt some of the very best views of Rio. 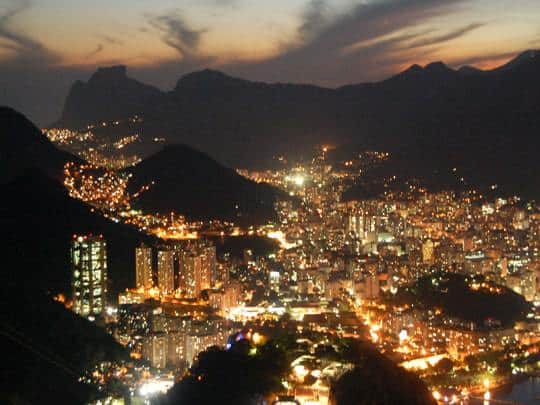 Get yourself in a cable car for some downright spectacular views

2) Marvel at the breathtaking scenery stretching out below the feet of the Christ the Redeemer Statue. I highly recommend taking the less-trodden path and climbing the mountain up to Christ. The trail starts in Parque Lage – just ask a park guard to point out where the trail begins. It takes around an hour, and at some points you have to pull yourself up with ropes, but the view is all the more rewarding and you won’t feel so guilty about all those caipirinhas you’ve been guzzling. 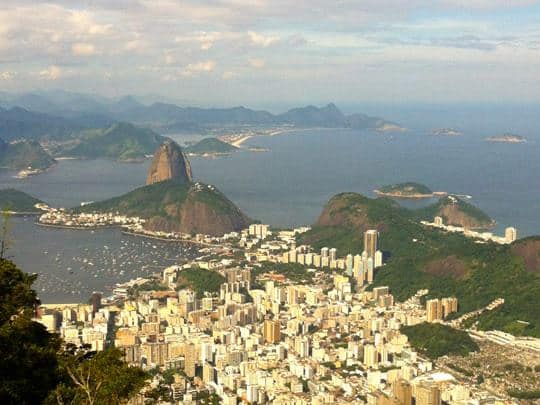 View of Rio from Christ the Redeemer

3) Check out Rio’s new cable car system in Zona Norte. The first of it’s kind in Brazil, the Teleférico do Alemão is taking Rio’s tourism to new heights. Seeing Rio from this angle is alluring in a completely different way, and is key to understanding the complexity and richness of the city. It’s a great platform from which to appreciate the exceptional and unique charm the favelas bring to Rio, and the importance of our awareness of these thriving communities that are now becoming more integrated, vibrant neighbourhoods thanks to the improved infrastructure that is reconnecting the favelas of Zona Norte.

4) Pay a visit to the Escadaria da Lapa. These beautiful stairs are covered in thousands of tiles from around the world, a project that began in the 1990s by the late Chilean artist Jorge Selarón. Up until his suspicious death early last year he could be found hanging out on the steps day and night, working and chatting with the locals and tourists in his distinctive red shorts and crazy Salvador Dalí-esque mustache. 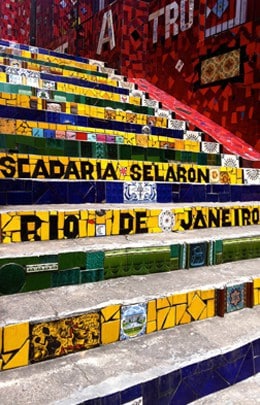 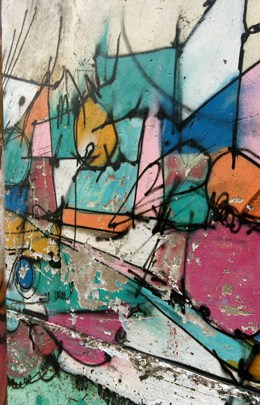 5) Take a look at the Cathedral of Saint Sebastian. Next to the Lapa arches, you can’t miss it – just look out for the giant concrete dalek from Dr. Who! Make sure you take a peek at the stunning stained-glass work inside.

Music and Dancing – an Essential Component of Life as a Carioca:

1) Go out in Lapa on a Friday night. Join the beautiful men and women dancing in the streets of Lapa on Friday nights, ice cold caipirinhas in hand, tapping their feet and clapping their hands to the percussion playing under the Lapa arches, the samba playing from the understated bar on the corner and the baile funk (also known as favela funk, a popular electronic dance music native to Rio) blaring out from the clubs. The atmosphere is intoxicating and invigorating – but be sure to keep a close eye on your valuables. Have a drink at the popular Arco Iris da Lapa bar on the main street, Avenida Mem de Sá, 1960, before heading out into the streets. And bear in mind things don’t really heat up till gone midnight.

2) Spend another Friday night at The Maze. Every other Friday this unique live music/jazz club in a favela in the neighbourhood of Catete hits all the right buttons – a veranda with breath-taking views across the Guanabara Bay, brilliantly talented musicians and delicious cocktails. Get lost dancing your way through the hidden nooks and crannies until the sun begins to rise. 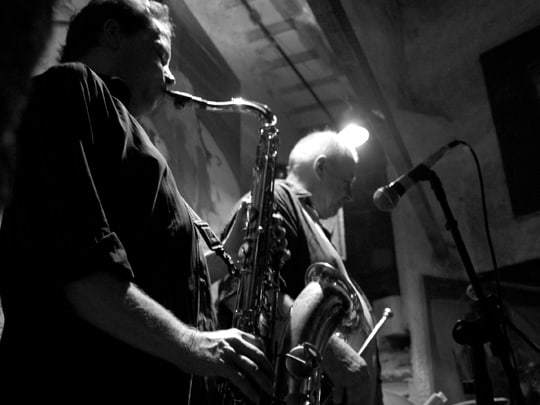 3) Samba away at Pedra do Sal on a Monday night. Pedra do Sal, Salt Rock, is so called because the slaves working in the docks used to transport huge loads of salt up the side of this rock. Steps were carved into the side of the rock to facilitate their work. Nowadays, these steps are crowded and filled with Cariocas and tourists alike every Monday night as a roda da samba, a samba dance circle, takes place in the square at the bottom of the rock. The atmosphere is buzzing and the music infectious. Get your lips round a caipirinha from one of the street stalls with maracujá, passionfruit – a delicious alternative to the traditional lime.

4) Eat and dance at Casa Rosa in Laranjeiras on a Sunday night. You’re in for a treat with traditional Brazilian feijoada (a bean stew with beef or pork) served up along side live samba and caipirinhas galore. Get there early, around 7pm, to avoid disappointment. This is a popular spot and the food runs out quick!

Activities – Besides Sunning Yourself on Rio’s Gorgeous Beaches:

1) Spend a day wandering the streets of Santa Teresa. Take a motorbike taxi up to Santa Teresa from outside Glória metro stop – this is a lot of fun, just make sure you hold on tight! Fantastic graffiti litters the cobbled streets, crumbling colonial mansions are now home to bohemian art cafes and galleries, and the ever pulsing beat of Brazilian samba floats in the air around the plentiful bars and restaurants. Whilst there, make sure you visit the Museu da Chácara do Céu – an old colonial house with a small collection of modern art and fantastic views of the city. This part of town is not to be missed! 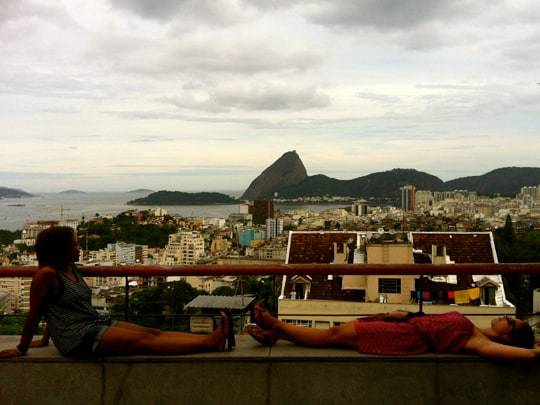 View from the museum in Santa Rosa

2)  Rent a bike and cycle round Zona Sul. The perfect day for this is Sunday; on Sundays, the roads along Copacabana and Ipanema beaches are blocked from traffic so all the Cariocas are out strolling, running, cycling and rollerskating. It’s a pleasant ride up and down along the beaches and around the lake. You can also rent pedalos out on the lake. 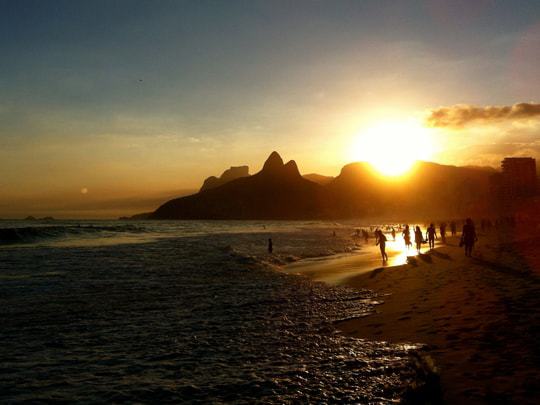 Make sure to catch a sunset at Ipanema beach

3) Visit the Centro Cultural Banco de Brasil. This cultural organisation is housed in a beautiful art deco building that was once the Bank of Brazil in the centre of Rio’s old financial district. The exhibitions are always changing but always worth a visit and admission is free.

4) Watch the sun set at Arpoador. This is the name of the rock that juts out between Ipanema and Copacaba beach. You are likely to find groups practicing capoeira around here, a brilliant display of traditional Brazilian martial art mixed combined with dance and music. And every evening, without fail, the sun gets a round of applause when it sets behind the striking mountains called Dois Irmãos, the Two Brothers. Truly magical.

1) One of the best restaurants is Nova Capela, on Avenida Mem de Sá, 96. This restaurant has been going since 1903, and the greatest thing is it doesn’t close till 5am. So head on in after a night out in Lapa for a taste of their famous roast goat with garlic and broccoli rice.

2) Parque Lage is a beautiful spot for coffee or a bite to eat. The café is situated in a glorious former mansion which also houses an art school, so there are regular free art exhibitions on show. 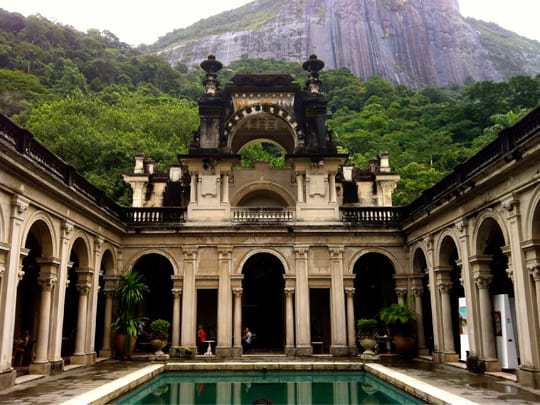 3) If you’re feeling peckish up in Santa Teresa, a great place to eat is Nega Teresa on Rua Aurea, 24. Conveniently close by is Bar da Fatinha, Rua Aurea, 2, with great drinks and live music on Thursdays and Fridays.

4) Step back in time at the Confeitaria Colombo. Founded as a pastry shop in 1894 and located in the centre on Rua Gonçalves Dias, 32, it seems that time has stood still inside this sumptuously decadent tearoom. It’s a wonderful place to stop for coffee and treat yourself to something sweet. You can also try one Brazil’s famous savoury treats such as a coxhina, shredded chicken wrapped in dough and the deep-friend. Delicious. 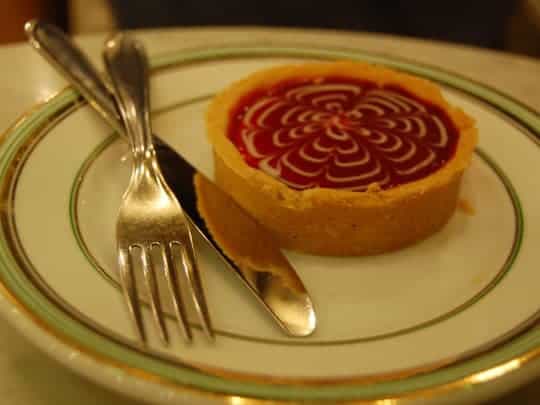 Written by: Shakia Stewart a traveler who simply can’t get enough of South America, she’s currently on month four of her fifth trip to the continent. To read about more of her travels, and see some incredible photography, check out her personal blog!

DON’T GO WITHOUT IT